Slaughter and the Dogs - "Manchester Boys" 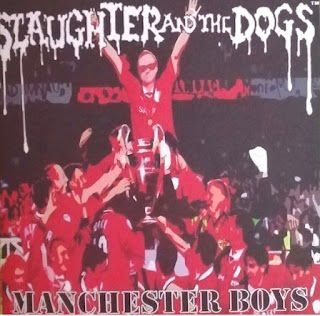 I suppose it's no surprise that the best '77-style punk single of the year comes from a band that's been playing this kind of music for over 45 years! It's not quite accurate to say that Slaughter and the Dogs are "back" when they never really went away. But Wayne Barrett has definitely reinvigorated this storied group with a young, aggressive lineup and a crackling new single. "Manchester Boys" is nothing short of classic Slaughter and the Dogs. It's a powerhouse pub punk football anthem with an infectious melody and a rousing chorus that will compel you to sing along (unless you're not a Manchester fan!). And Barrett sounds great on lead vocals! In the midst of a pandemic, this song may have you longing for a time when people could gather in mass, drink copious amounts of beer, and cheer on their team to the bitter end. We can all look forward to a time when those things are again possible. In the meantime, you can blast "Manchester Boys" in the company of smaller groups or even when you're alone - because love of team will prevail even during a global pandemic! The B-side of this release will be familiar to all of you. It's a newly recorded version of the band's classic song "Where Have All the Bootboys Gone". For this new rendition, Barrett and the boys have chosen to give this iconic number a kick in the ass for 2020. It's a faster, harder, and tougher update of the original. It really shows the power and fierceness of this new Slaughter and the Dogs lineup. You're facing a high bar when you re-do such a beloved tune, but these guys absolutely killed it. What a raging cut! Once this band is able to get back on stage and tour again, you will want to be there!
"Manchester Boys" is no run of the mill effort from an oldtimer punk band. It's a first rate shot of old style sing-along punk from a band that's got as much desire and energy as ever. The single is out on Blighty Records. If you want to hear it, you'll have to do it the old fashioned way and buy the vinyl. For more information, check out Slaughter and the Dogs on Facebook or send an email to Florianschueck@web.de!
-L.R.
https://www.facebook.com/Wayne-Barrett-Slaughter-And-The-Dogs-1526559330957187/
https://www.facebook.com/slaughterandthedogsuk/
https://www.discogs.com/Slaughter-And-The-Dogs-Manchester-Boys-Where-Have-All-The-Boot-Boys-Gone/release/16029072
https://slaughterandthedogsuk.bandcamp.com/
Posted by Lord Rutledge at 8:01 AM

Firstly this can not be classed as Slaughter and the Dogs. Its just one of SATD former vocalist and 3 of his French mates. The B side is a godddamn awful version of the classic Where have all the Boot Boys gone. If anything it highlights just how talented the original line up were. Manchester Boys the A side is at best a total embarrassment. Just how the co writer of the true punk classic Cranked Up Really High could put his name to this dribble is beyond me. Take the lyrics "the cherry on the cream" its juvenile and if thats what over 45 years in the music business has turned you into then if ever there was a need for re training for another job then this is it!!! ps the actual term is "Cherry on the Cake". As a lifelong fan of Slaughter and the Dogs and a collector of all things SATD this rubbish will never grace my collection. Dont believe me take a listen for yourselves -10/10 :-(

What utter shite... this release by a pick up band and this review are total crap

Not heard it and no intention to. No Mick Rossi no slaughter and the dogs

I love Slaughter And The Dogs.
Wayne Barret is one of the best rock frontmen....

Absolute garbage. Wayne has been a bloated hack for a long time now and this single is an embarrassment. How do you release a SATD single without Mick Rossi? He is the finest part of the band. The Bite Back album proved this. No Rossi, no SATD.

It's quality - the cream reference is clearly referring to Boddingtons, Moz, Manchester boys will appreciate that