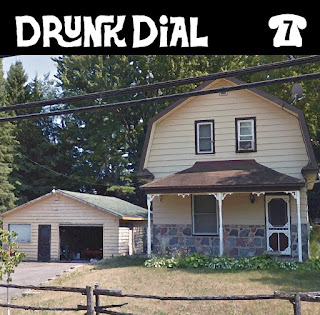 For the latest 7" from Drunk Dial Records, we have something a little different. The artist is CAREFUL, the new solo project from Dave Williams (CRUADES, Steve Adamyk Band, Sedatives). And for the lack of a better term, this is by far the most serious sounding volume in the Drunk Dial series. I would even venture to say that Williams was permitted to record this song completely sober. The track "Comeuppance"  is a very personal and powerful number that reflects Williams' state of mind following the breakup of CRUSADES. To say that the demise of the band hit him hard would be an understatement. He fell into (in his words) "the kind of deep-seated sadness that could only be managed by regular unpacking and exploration". This new project CAREFUL became an outlet for him to let out all of his thoughts and emotions, with the end goal of providing help or inspiration to others who are struggling in life. Stated influences included The Lemonheads, Juliana Hatfield, Dinosaur Jr., Punchbuggy, and Doughboys - early-to-mid 90s alt-rock favorites of his that set him on the path towards punk and hardcore. I love that Williams had the courage to put himself out there with "Comeuppance". And as a huge fan of earlier '90s indie/alternative stuff, this is a real musical sweet spot for me. I totally dig the straight-forward driving indie rock sound with impassioned vocals and lyrics. It reminds me of a time in my life when the best way to get myself out of a dark place was to follow someone like Bob Mould into his own dark places. In the end, "Comeuppance" proves to be a rousing and uplifting number. The B-side is a highly energized cover of "Ingrown" by the '90s Aussie band Smudge (fans will note the Lemonheads connection!).
Digital and vinyl copies of CAREFUL's contribution to the Drunk Dial series can be purchased via Bandcamp. An extremely limited edition of smoke vinyl copies are available - with proceeds being donated to Rainbow Railroad. A full-length debut from CAREFUL is already in the process of being recorded, and I am looking forward to that very much!
-L.R.
https://drunkdialrecords.bandcamp.com/album/drunk-dial-7-careful
https://www.facebook.com/drunkdialrecords
https://www.rainbowrailroad.org/
Posted by Lord Rutledge at 8:23 AM