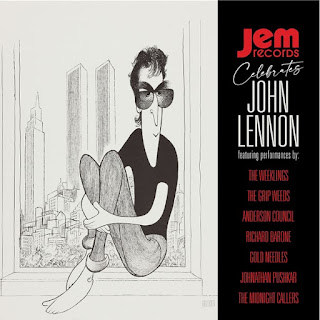 On the occasion of what would have been John Lennon's 80th birthday, today Jem Records releases a very special project to honor his memory. Produced and directed by label president Marty Scott, Jem Records Celebrates John Lennon features seven of Jem's top artists covering 15 beloved Lennon songs. The song selections cover every phase of Lennon's career from early Beatles classics all the way through 1980's solo smash "(Just Like) Starting Over". Making a tribute to pop music's (arguably) greatest songwriter presents certain challenges for sure. For starters, how do you choose which songs to include when there are countless classics to pick from? And how do you improve upon perfection? The answer to the former is that you can't go wrong with any of the cover choices. And as far as the latter point is concerned, no one is ever going to try and out-do John Lennon. The real idea is to celebrate his music and continue to fill the world with his songs.
The lineup for Jem Records Celebrates John Lennon consists of The Weeklings, The Midnight Callers, The Grip Weeds, Johnathan Pushkar, The Gold Needles, Richard Barone, and The Anderson Council. It goes without saying that every single one of these artists is massively influenced by The Beatles and John Lennon. For this project, they all did their best to put their signatures on legendary Lennon-penned songs. It seems weird to say that John Lennon's talents might sometimes be taken for granted. But listening to all of these songs on one collection, I find myself with a renewed appreciation for his greatness as a lyricist and architect of guitar-driven pop music. Honestly, all of the performances on this album are exceptional and highlight the wealth of musical talent on the Jem roster. But a few tracks especially stand out to me. The Midnight Callers had the neat idea of covering both the white album demo "Child of Nature" and the solo track it evolved into, "Jealous Guy". Their take on "Jealous Guy" is absolutely extraordinary - in my opinion the high point of the entire album. It would probably be sacrilegious to say it's better than the original. But if it's not, it comes very close! I may be biased since he's one of my favorite Jem artists, but Johnathan Pushkar's version of  "(Just Like) Starting Over" is another major highlight for me. I have a sentimental attachment to that song because it always reminds me of being nine years old and discovering pop music for the first time. And I must say that Pushkar's interpretation really does it justice. It has the feel and tone of one of his original numbers, which is hardly surprising given that his musical aesthetic is so deeply grounded in a love for The Beatles. In typical Johnathan Pushkar fashion, this track makes me smile. Also noteworthy are The Weeklings' modern, hard-rocking version of Rubber Soul's "The Word", Richard Barone's super lively mash-up of "Revolution" and "Power to the People", a stunning "Strawberry Fields Forever" from the legendary Grip Weeds, and faithful but tremendously inspired versions of Beatles classics "It Won't Be Long" (The Midnight Callers again!) and "No Reply" (The Gold Needles).
To me, the most important thing about a tribute album is that you should be able to feel the love that went into it. That's most definitely the case with Jem Records Celebrates John Lennon. Of course this album features some of the finest bands and artists in contemporary pop music. But the real star here is John Lennon. His songs are interpreted with great reverence and a passion that's palpable. When a tribute album falls short, I find myself just wishing I could listen to the original songs. This tribute, on the other hand, inspires me to the listen to the original songs. While Marty Scott is super enthusiastic about everything he releases, I can tell he's especially proud of this album. And he should be. Let's hope for a sequel in another 20 years!
-L.R.
http://www.jemrecordings.com/
https://www.facebook.com/Jem-Records-607560186079388/
https://www.amazon.com/Jem-Records-Celebrates-John-Lennon/dp/B08FD1RL1Z
Posted by Lord Rutledge at 8:47 AM

Wuauuuuhh a great album , the cover of THE WEELKLINGS - The Word is a Masterpiece !!!.