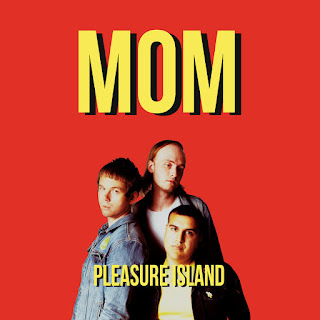 I always love it when I can start off a month in style! Donny, Frank, and Luke - collectively known as MOM - released two of the year's best pure pop singles over the course of the summer. I've had quite a few people comment to me privately about much they enjoyed those singles ("Tonight" and "Don't Leave With My Heart"). Mike from Vista Blue even gave "Don't Leave With My Heart" a spin on his excellent radio show The Radiant Radish. MOM has spent much of this year recording its debut album Pleasure Island with good friend Harry Log "somewhere in the Swedish wilderness". The album was officially released last week via Bandcamp and Spotify.
It goes without saying that Pleasure Island is a treat for pop fans and eternal teenagers everywhere. On this 11-track release, MOM combines the best elements of 1970s bubblegum, glam, and power pop along with a touch of early '80s new wave. Both singles are included along with brand-new hits like "Better Than You" and "Ordinary Girl". The band also includes some really strong ballads and deep cuts ("Hurt By You", "Talk To Me") that give the album a well-rounded feel. MOM has a somewhat unusual approach to making music, as Frank and Donny share guitar, drum, and synthesizer duties while Luke plays bass and some occasional cowbell. Donny is the primary songwriter, and he doesn't hold back on the sugar sweet melodies and radio hit hooks. This album is as pop as pop gets! If your record collection includes the likes of The Bay City Rollers, Nick Gilder, The Sweet, The Records, Milk 'N' Cookies, Racey, Mud, and Kidda Band, you will most definitely conclude that Pleasure Island is accurately titled. Look for a vinyl version sometime in the near future!
-L.R.
https://mommusic.bandcamp.com/album/pleasure-island
https://www.facebook.com/musicbymom
https://www.instagram.com/musicbymom/?hl=sv
Posted by Lord Rutledge at 7:26 AM