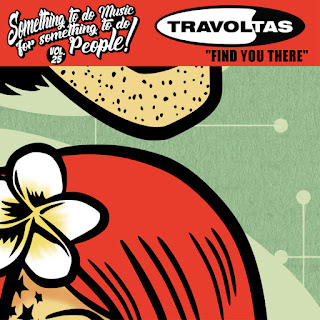 For the 25th volume of its Something To Do Music for Something To Do People series, Something To Do Records has something really special for us! "Find You There" is the new single from Netherlands pop legends Travoltas, and it's an absolute slice of heaven! For 30 years and running, Travoltas have been the world's preeminent Beach Boys inspired pop-punk band. To the best of my knowledge, "Find You There" is the band's first new song in over three years. It was written by Daan van Hooff and is the band's first recording with Tim van Doorn behind the keys and on backing vocals. This, my friends, is classic Travoltas. It's that rare pop song that can clock in at nearly four minutes and not seem like it's twice as long as it should be! Perry and the boys have never sounded better. The melodies and harmonies on this track are simply to die for, and I just love how the song tugs at your heartstrings. This is the song a 24-year-old Brian Wilson would have recorded if he'd time traveled to the late '90s and joined a pop-punk band. It sounds like it should be playing over the closing credits to an epic love story movie. While Travoltas have been so good at this sort of thing for decades, this just might be their ultimate Pet Sounds moment. If you believe in fate, romance, and true love, put on some headphones and bask in 234 seconds of pop bliss!