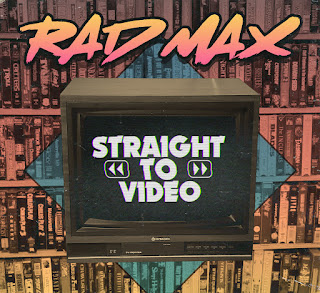 Portland, Oregon's Rad Max recently contacted me about their new single "Driller Killer" -  a song inspired by the film Slumber Party Massacre II. I immediately dug it and quickly ascertained that it comes from a full album of songs devoted to '80s pop culture obsession. Of course I should have known that already since the band emailed me about the album six whole months ago! Woops! That was very bogus of me. While Rad Max may be 80s-fetishists, that's 100% okay by me because I'm one too! The band's debut album Straight to Video transports you to a world full of VHS tapes, shopping malls, video arcades, and cool movies with cheesy training montages. Musically, Rad Max plays a punky brand of new wave pop rock that you can dance to. Even if they weren't '80s-inspired, these would be cool songs. They've got real hooks and a great goofy energy to them. On lead vocals, Rad Rachel is likable and spunky in a way that transcends the band's schtick. The most fun part, of course, are the humorous lyrics and wonderfully ridiculous song ideas. The aforementioned "Driller Killer" recounts all the bad decisions that teens continually made in '80s slasher movies. "Flix From '86" salutes nearly every cool movie released in 1986. "Is That Freedom Rock?" hilariously lampoons the most notorious TV commercial ever made for a compilation album. "The Computer Controls the Tower" is a nod to the countless evil computers of pop culture's past. There are multiple Tom Hanks movies referenced on this album, and luckily one of them is the cinematic masterpiece The 'Burbs.

Does much of my fondness for Straight to Video have something to do with nostalgia? Of course. But even if you never experienced '80s culture first hand, you'd have a hard time denying that this record is tremendous fun. Rad Max have done a fine job of honing in on aspects of the '80s that were completely awesome, absolutely ridiculous, and in many cases both. The whole reason that '80s fetishism endures is that the '80s really were that cool. And it's not likely that Rad Max will run out of movies, TV shows, and fashion trends from the '80s to write songs about. When it's safe to congregate in bars and clubs again, Straight to Video ought to be a fixture of every '80s night ever!

Posted by Lord Rutledge at 8:17 AM