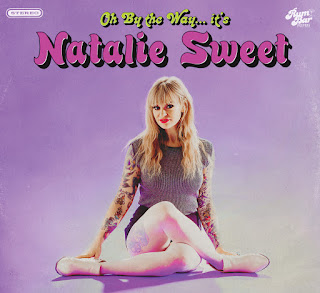 Oh, what a day for Rum Bar Records! Today Malibu Lou has launched not one, not two, but three great albums back into orbit! My last but most definitely not least Rum Bar post of the day concerns the first American release of Oh By the Way​ it's.​.​.Natalie Sweet. Originally released in Europe last year on the fabulous Surfin' Ki Records, this was my #2 album of 2019. And I sometimes lose sleep over not having made it #1! This is the debut solo album from Natalie Sweet, formerly of The Shanghais and The Control Freaks. It's kind of like The Shanghais album that never was, but it's also a vintage Travis Ramin production (see also: Candygirl, Tina and the Total Babes). Oh, and Morten Henriksen of the legendary Yum Yums is on guitar. Sweet basically assembled a power pop super group for this album! I won't get too deep into a review since I've written about this album before. But I'll just say that it finds Sweet and Ramin fully embracing their shared love for new wave power pop, girl groups, '50s doo-wop and rock n' roll, and the almighty Ramones. After Ramin completed work on Oh By the Way, he teased it as a "slammin' power pop album somewhere between Rocket to Russia and Parallel Lines". And I must say that his description was spot-on! If you can never get enough of your Josie Cotton, Holly and the Italians, and Nikki and the Corvettes records, be sure to add this one to the rotation. Vinyl still available here!
-L.R.
https://rumbarrecords.bandcamp.com/album/oh-by-the-way-its
https://nataliesweet.bandcamp.com/
https://www.facebook.com/RumBarRecords
Posted by Lord Rutledge at 6:56 AM