The Feels - "She's Probably Not Thinkin' Of Me" 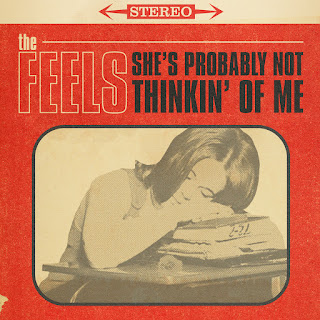 What a wonderful surprise that a new track from The Feels has popped up out of nowhere! The Feels is the (mostly) solo project from Christian Migliorese (The Tattle Tales) - one of my favorite songwriters ever. It's been four years since the release of The Feels' absolutely fantastic mini album Dead Skin and (shockingly) over a decade since The Tattle Tales last released music. Yeah, really! New single "She's Probably Not Thinkin' Of Me" is set to appear on an upcoming EP entitled 11 Monthly Listeners Can't Be Wrong! It picks up where Christian left off with Dead Skin. Call it whatever you like: pop rock, alt pop, power pop, indie pop, or just plain pop. This is melodic guitar pop at its finest. In classic Christian Migliorese fashion, it delivers big crunching guitars, gorgeous melodies, heartfelt vocals, lyrics that'll stop you in your tracks, and hooks for days. It clocks in at just a hair over two minutes, leaving you wanting more. So don't be cheap; fork over the 99 cents so you can own this song and play it as many times as you want!
Hearing "She's Probably Not Thinkin' Of Me" inspired me to revisit the entire Christian Migliorese back catalog. I've discovered two things: 1) all of his stuff is just as good as I remembered and 2) he's definitely taken his artistry to another level with The Feels. My god, can this guy ever write (and sing) a pop song!
-L.R.
https://igotthefeels.bandcamp.com/
https://thetattletales.bandcamp.com/
Posted by Lord Rutledge at 5:55 PM

#1 Hit of the Month! Thanks