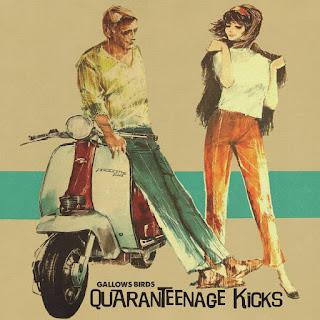 Now it can be told! Up until very recently, Gallows Birds were a band shrouded in secrecy. I got an advance listen to the group's instant smash "My Lambretta" and knew I had discovered a band I was going to be into in a very major way. Internet research failed to yield any further information. And although I was eventually able to sniff out the involvement of Travis Woods (Eccentric Pop Records head honcho), I was still left in suspense. In recent weeks, Gallows Birds have finally revealed themselves. Woods is the guitarist and songwriter. Locked down in Wilmington, North Carolina this past spring with daydreams of scooter rides and summertime fun running through his brain, he started writing and recording songs. He reached out to some friends long distance to bring these tracks to life. Richie Holes (from the amazing pop-punk band Goin' Places) recorded the lead vocals at home in New York. Glenn Wellman provided all the drum tracks from his residence in Johannesburg, South Africa. And just like that, Gallows Birds had made a record! Lou from Rum Bar Records jumped on the chance to release it. Out today, Quaranteenage Kicks is the ultimate summer pop record. And it doesn't even matter that summer is over. When you've got music like this, summer is eternal!
Quaranteenage Kicks is an album most obviously inspired by the early Beach Boys. With the dark cloud of a pandemic hanging over him, Woods found joy in creating a universe where little matters beyond girls, cars, surfing, and sunshine. Other influences at play include the Ramones, Lookout! Records garage pop combos like The Hi-Fives & Smugglers, and even some old new wave pub rock (the band covers both Graham Parker and Wreckless Eric's band the Len Bright Combo). Kicking off with the upbeat "Back to the Beach", this album wastes little time setting a tone. This is a high-spirited rock and roll record with a heavy pop-punk influence. These are songs that will make you feel good. Tracks like "GTO" and "South for the Summer" will have you looking forward to those good times and carefree days that we have to hope are right around the corner. Even a bitter love song like "So Unhappy For You" is still tremendous fun. Holes was the perfect choice to play the Mike Love role to Woods' Brian Wilson. The dude was born to sing songs about girls!
I love how Gallows Birds managed to make something uplifting and hopeful out of a dire situation. In the definitive feelbad year of 2020, we can enjoy the definitive feelgood record in Quaranteenage Kicks. For many years into the future, "My Lambretta" will be an annual fixture of my summer playlists. The original songs are terrific, and the covers all fit splendidly. No pop-punk fan will want to miss the band's sped-up rendition of Parker's classic "Local Girls". And while the Beach Boys' "Dance, Dance, Dance" was an obvious cover choice, I can't imagine a more perfect way to conclude the album. A mystery no more, Gallows Birds are the international pop-punk surf rock and roll super group the world needed. Let us hope for the day when they can assemble in person and play a beach party near you!