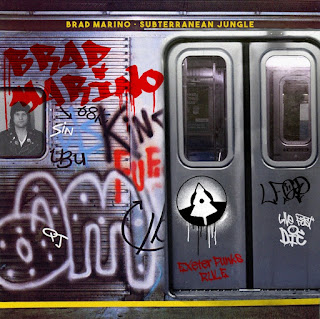 I can never resist writing about a Ramones cover album - especially when one of my favorite artists is involved! Subterranean Jungle is by no means one of the most celebrated albums in the Ramones catalog. But like any perceived "lesser" Ramones LP, it's still a damn good record (and definitely underrated)! By the time the Ramones were writing and recording Subterranean Jungle in the latter months of 1982, they had clearly set out to get back to their punk rock roots. Brad Marino notes that this album falls somewhere in between "poppy" Ramones and their harder-sounding efforts of the later '80s. And that's a real sweet spot for a lot of fans. Marino has always been a big fan of this particular Ramones album. Having thought about covering a lesser-known Ramones album for years, Marino used his 2020 quarantine time to make his own version of  Subterranean Jungle. If nothing else, this release ought to get people thinking and talking about Subterranean Jungle again!

One of the worst things I can say about Subterranean Jungle is that it made no sense for a Ramones album to start out with two covers! But with that said, Marino's versions of "Little Bit O' Soul" and "I Need Your Love" are as excellent as you'd expect given his talents and musical background. He makes the latter sound like it could have been written by the Ramones! While Marino is no stranger to straight-up Ramones worship due his time in Rydells, he also brings his love for classic pop and rock and roll into the mix on this album. So while he's covering Subterranean Jungle, he's not totally trying to copy it. It's no surprise that he does well with Joey-penned songs like "My My Kind of Girl" and "Everytime I Eat Vegetables It Makes Me Think of You". If you don't already think of those two as great Ramones song, Marino's versions just might have you re-evaluating your stance. Other particular high points on this release include the Dee Dee compositions "Outsider" and "Somebody Like Me".

Perhaps the best thing about a re-do of Subterranean Jungle is that it lifts these great songs from the shadow of the abysmal production and drum sound of the original album. Marino, a huge fan of both the Ramones and the '60s pop music that so heavily inspired them, truly "gets" all of these songs. His treatment of this material reminds us what a terrific album Subterranean Jungle still is and how it could have been even better had more sympathetic producers been at the helm. Obviously, you've got to be a Ramones super fan to even consider buying a cover version of a Ramones album. Then again, who isn't a Ramones super fan? Vinyl for this release sold out in just four days! Look for a new album from Brad Marino in 2021!