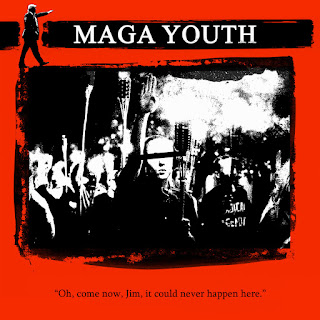 Post election 2016, it was declared by many that a Donald Trump presidency would lead to a revival of the angry, politically-charged punk rock that characterized the Ronald Reagan years in America. While I would argue that political punk rock never really went away, I understood the point. Four years later, I would say that these predictions have been largely realized. In many genres of music (not just punk), artists concerned with social justice and resisting the rising tide of white supremacy and fascism have had a lot to write about. If you're inspired and energized by political punk rock, there's plenty of it out there. Whether or not any of it stacks up to the Reagan era stuff is a matter of personal opinion. This brings me to the mysterious MAGA Youth. This band consists of five old punk rockers who decided to re-do actual political punk songs from the '80s and revise the lyrics to reflect life in the Trump era. That's a pretty neat idea in my book. The band's debut EP is made up of updated versions of classic tracks by Reagan Youth, Wasted Youth, Youth Brigade DC, 7 Seconds, and DayGlo Abortions. These guys have taken the hardcore punk sound of 30-40 years ago and made it topical for 2020. There's a lot of political punk that I just can't get into because it doesn't speak to me musically. But MAGA Youth definitely hits the old school punk sweet spot for me. These songs have me pumping my fist and raring to go. And if the band decides that a second EP is necessary, there will be no shortage of old songs or new problems to choose from! All money collected from the sale of this EP will be donated to the Southern Poverty Law Center to fight hate groups, teach tolerance, and seek racial justice.
-L.R.
https://magayouth.bandcamp.com/album/maga-youth
https://www.splcenter.org/
Posted by Lord Rutledge at 7:32 AM

Just to give the "other side of the coin," so everyone knows where the money is going, here are the facts about the SPLC. The "Southern Poverty Law Center" is an anti-Christian hate group being investigated by the IRS that maintains a massive slush fund of cash in the Cayman Islands. The SPLC's recent president, Richard Cohen, stepped down amid allegations of impropriety, and, according to CNN, was "thrust into chaos over allegations over its treatment of minority and female employees. Some employees told CNN the group suffers from a "systemic culture of racism and sexism within its workplace."

They apparently have cleaned house, but most notable here is that you're quoting fake news. You do know what this means don't you? You're going to have to surrender your Deep State junior ass commander card. And listen, Q would come and collect the company tin foil hat himself but he's holed up in his secret bunker behind the pizza oven and man is he beading up with sweat right now.