The Lemon Drop Gang - I'm Not the One! 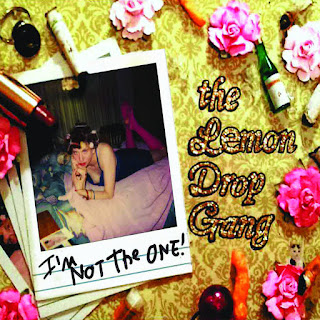 I know I'm starting to sound like a broken record, but Rum Bar Records has added another great band to its roster! The Lemon Drop Gang hails from Tucson, Arizona and features Johnny O'Halloran (Magnatone, Tina and the Total Babes, Nikki Corvette and the Stingrays) on guitar and his wife Steph (Tulip Sweet and Her Trail of Tears) on vocals. Johnny O'Halloran is, of course, from Boston's famous O'Halloran family. He and Malibu Lou have been pals for decades, so it's only fitting that The Lemon Drop Gang are now officially Rum Bar recording artists!
A band name like The Lemon Drop Gang perhaps suggests a sweet indie pop group. Well let's just say that names can be deceiving! Reissued today on Rum Bar, the band's 2016 debut album I'm Not the One is indeed a really great pop/punk/garage/rock and roll record with hooks for days. But it's also quite haunting and at times straight-up creepy - a perfect album for the Halloween season! Steph O'Halloran is a powerhouse on lead vocals. Her voice has an amazing tone but also an undeniable presence. Once you hear her voice, it's hard to get it out of your mind. A running theme of this album is "tales of psychotic love". It's full of songs about obsession, possession, outright stalking, and love gone horribly, horribly wrong. I'm not a big horror guy in the traditional sense. But if you're talking about psychological horror, well that's way more my speed. Steph O'Halloran has got a sick and twisted mind, and I absolutely LOVE it! I appreciate how many of these songs seem so pleasant and tuneful at first listen before you really dig into the lyrics. Then things turn scary.
Musically, The Lemon Drop Gang is drawing a lot from '60s pop and girl groups as well as '70s punk and new wave. They are at their core a melodic guitar pop band. But their songs have hidden layers and take surprising turns. And in there with the punk, garage, and power pop influences, you can definitely hear some eerie, distinctly southwestern undertones. Songs range from fierce and punky ("Hit the Wall", "Bubble Yum") to beautifully haunting ("Ghost", "You Just Don't Know It") to perfectly pop ("Georgie"). Moving away from the general theme of the album, "Georgie" is a response to the The Seekers' 1967 hit "Georgy Girl". If you've ever listened to "Georgy Girl" and thought, "God, that's such terrible advice!",  you will feel much better about "Georgie". This song celebrates individuality and advises against the trap of living your whole life in accordance to what society expects of you. That's a wonderful and powerful message, and "Georgie" is one of the year's most essential independent singles. Another highlight is closing track "Time To Myself" - a true anthem for those who want nothing more than to get away from everything and everyone. Talk about a song that really holds up in 2020!
I'm Not the One is a stunning debut from one of the most unique and fascinating garage pop bands I've come across in a long time. It's definitely a pop record, but in a wonderfully twisted way. Of course these songs will quickly have you tapping your toes and humming along. But they'll stay with you long after that and just might haunt your dreams. The Lemon Drop Gang have been around a long time and are fixtures of the Tucson music scene. I can only hope that being on a label like Rum Bar will bring them the international exposure and adoration they so richly deserve. Don't let 'em change ya, Georgie!
-L.R.
https://rumbarrecords.bandcamp.com/album/im-not-the-one
https://thelemondropgang.bandcamp.com/album/im-not-the-one
https://www.facebook.com/lemondropgang/
https://www.facebook.com/RumBarRecords
Posted by Lord Rutledge at 6:56 AM