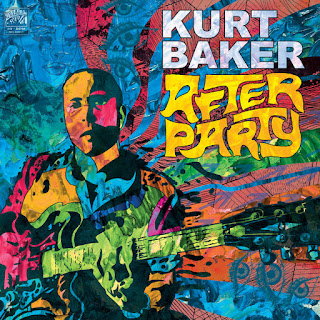 The trilogy is complete! Eight years ago, Kurt Baker and Wyatt Funderburk co-wrote Baker's first full-length album Brand New Beat. Produced by Funderburk, Brand New Beat quickly became a modern classic of power pop. It was a record so great that even its outtakes made for an album (Brand New B-Sides) that would be the envy of a lot of pop bands. Baker and Funderburk collaborated again on 2015's Play It Cool - which was arguably even better than Brand New Beat. Five years later, Baker, Funderburk, and all the Party Animals are back with the third (and best!) installment in this series.
Out today on Wicked Cool Records, After Party manages to be the best of both worlds. It has the stylistic variety of Play It Cool, but in spirit it's closer to the early '80s power pop influenced Brand New Beat. Joining Baker and Funderburk are old pals Geoff Palmer (guitar), Kris Rodgers (keyboards), and Craig Sala (drums). With Baker now residing in Spain, these guys don't get the chance to see each other all the time. And that gives After Party a "the gang is back together" type feel. It was recorded this past January and February while Baker was back home in Portland, Maine. All of these individuals have seen their musical careers take off in the years since Brand New Beat was released. But they were all happy to get together and make the kind of record that only the Kurt Baker Band can make!
While I'm also a big fan of Baker's more garage/rock and roll centered Spanish band The Kurt Baker Combo, I'm always going to have a soft spot for the power pop stuff he co-writes with kindred spirit Funderburk. After Party is informed by many of the same influences that had me connecting so instantly with Brand New Beat. It's got that new wave/power pop meets early '80s FM rock (Donnie Iris, Cheap Trick, .38 Special) vibe with just a hint of '90s Lookout! Records. I've previously featured "Over You" and "I Like Her A Lot" on this blog - both of which are classic Baker/Funderburk collaborations. In a similar vein are "Wandering Eyes" (a crunching pop-rock hit right out of the Rick Springfield playbook) and "She Don't Really Love You, Dude" (which is either power pop influenced pop-punk or pop-punk influenced power pop depending on your point of view). If you're into big hooks, punchy guitars, and catchy choruses, this album will not leave you wanting. But if you're looking for something a little different, Baker and the boys have got you covered. I dig how the gentle little McCartney-esque number "Waiting For You" turns up at just the right time. And if you wish that Joe Jackson's 1979-80 period had never ended, you'll be psyched to hear "Good". Elsewhere you've got power pop running straight into a Beach Boys song ("Used To Think"), spot-on new romantic/synth-pop worship ("Keep Dreaming"), and a genuinely lovely piano lounge ballad ("A Song and a Drink").
Brand New Beat was a huge album for a lot of people my age who grew up on '80s radio and then came to love pop-punk as young adults. As collaborating songwriters, Baker and Funderburk gleaned the best elements from 30 years of melody-driven rock music and created something that felt new and exciting in 2012. They easily could have resorted to formula and cranked out several more albums that were copies of Brand New Beat. But instead, they worked to build on their musical vision and embrace a wider range of influences. Once I came to accept that Play It Cool wasn't going to be Brand New Beat part 2, I quickly realized it was a better record. And that progression culminates with After Party. Baker and Funderburk are far better songwriters (and a far better songwriting team) than they were 8 or 9 years ago. After Party reflects that growth while still retaining the original spirit of the trilogy. Baker's name is on the cover of the record, but this is just as much Funderburk's creation (his production, as always, is immaculate). And this record certainly would not be what it is without the contributions of some of the finest musicians in today's rock and roll scene. Say what you will about 2020. But any year that gives us a new Kurt Baker record can't be entirely bad!
-L.R.
https://kurtbakerwcr.bandcamp.com/album/after-party
https://www.facebook.com/KurtBakerMusic
https://www.instagram.com/kurtmiltonbaker/
https://twitter.com/KurtMiltonBaker
https://www.facebook.com/WickedCoolRecords
Posted by Lord Rutledge at 6:57 AM