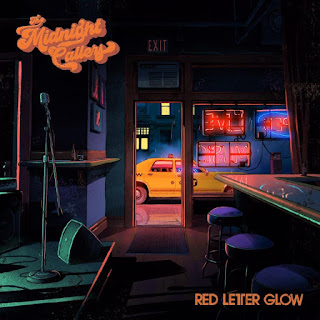 Fresh off of their stunning performances on the JEM Records Celebrates John Lennon compilation, The Midnight Callers are back with their debut album on JEM. This New York based foursome is comprised of Chris Paine (rhythm guitar), Martin Stubbs (lead guitar), Julien Budrino (drums), and Marley Myrianthopoulos (bass). Red Letter Glow is the name of the album, and it will be warmly received by those who enjoy punchy rock and roll with hooks. This, my friends, is an old school rock record! Influences range from '60s pop to classic rock to '70s/'80s power pop to '90s Brit-pop and alternative rock. The Midnight Callers pretty much have it all: the guts of a bar band, the talent to write hit singles, and the musical chops to rock arenas. And with the assistance of engineer/co-producer Kurt Reil (The Gripweeds), they've absolutely nailed the production on Red Letter Glow. This album manages to evoke the heyday of FM rock while still sounding fresh and modern in 2020.
One aspect of Red Letter Glow I especially enjoy is the variety of its songs. Kicking off with the high-energy rocker "41 Miles To Roscoe" (a recent Coolest Song in the World on Little Steven's Underground Garage!) and glam-rock influenced "Down On Luck", this album really comes out swinging! From there, it shows you the many sides of The Midnight Callers. "River Rise" channels The Beatles by way of Cheap Trick, while "Return the Favor" sounds like the best song The Knack never wrote. I know that "power pop with actual power!" is a music reviewer's cliché, but I can't think of a better description for "Not Tonight". "I Need You" sounds like a rock radio smash straight out of 1978. "The Lights Are On" is the sort of epic, "cigarette lighters in the air" power ballad that you almost never hear in this day and age.
Red Letter Glow reminds me of the rock albums I grew up on. It delivers a perfect mix of radio hits, rockers, deep cuts, and ballads. The songwriting, musicianship, and production are all top-notch. The Midnight Callers are a new and exciting rock and roll band in the classic style. And that's something I will never tire of. Another great find for JEM Records!