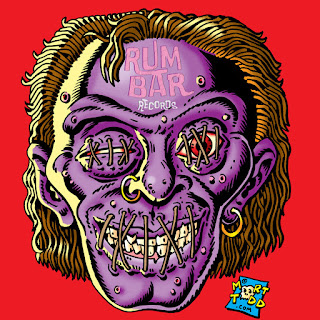 Who's ready for another Rum Bar Records sampler? Malibu Lou released a deluxe label sampler this summer, and now he's back with a massive, 39-track fall edition called ROCKTOBER! Like all of the previous samplers, ROCKTOBER is a free download showcasing the amazing bands and artists that make Rum Bar Records one of the world's top independent record labels. It covers musical styles ranging from garage to punk to glam to greasy rock and roll to hard rock to power pop to psychedelic rock to pub rock to country rock to dirty blues. Many of these tracks are from recent or upcoming releases. If you still haven't picked up the latest from The Yum Yums (a lot of people's album of the year!), Jerry Lehane, Geoff Palmer & Lucy Ellis, The Hi-End, and The Idolizers, you can hear choice selections from all of those releases. And if you're looking for a preview of Rum Bar's stacked slate of October releases, you can check out tracks from Gallows Birds, The Lemon Drop Gang, The Short Fuses, Natalie Sweet, French Girls, and The Shang Hi Los. For those who are still entirely unfamiliar with the Rum Bar catalog, label favorites like Watts, Cheap Cassettes, Indonesian Junk, Muck & The Mires, Brad Marino, The Dirty Truckers, Mono In Stereo, and Justine and the Unclean make appearances as well. I also dug the cool track from Electraluxx - who, having been on Melted Records, are as O.G. Rum Bar as it gets! The big new discoveries for me this time were French Girls (Phoenix-based pop/punk/garage band featuring veteran musicians Che Beret and Chiffon Baton) and The Lemon Drop Gang (Tucson-based group starring the legendary Johnny O'Halloran and his wife Steph). Both deliver ace pop rock and roll songs that really made my ears perk up. Brace yourself for the Rum Bar Arizona takeover!

Fans of Rum Bar Records may already own many of the songs on ROCKTOBER. But they might find an unreleased track or two for their efforts! The real audience here is people who know of the label but might only have a couple releases. Lou has been putting out a tremendous amount of great music lately in a variety of musical styles. For the bargain price of free, you can get a nice taste of what Rum Bar is up to right now. And while the downside might be that most of this stuff is previously released, that might actually be the upside as well. There's no filler here: just great tunes from a bunch of fantastic Rum Bar releases. Download and enjoy!

-L.R.
https://rumbarrecords.bandcamp.com/album/rum-bar-records-rocktober-free-digital-label-sampler
https://www.facebook.com/RumBarRecords
Posted by Lord Rutledge at 7:49 AM