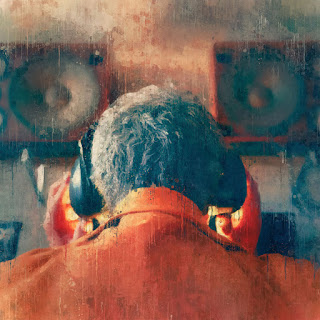 Disappear, the latest album from The Resonars, finds one of our finest modern-day pop craftsmen operating at the peak of his powers. For over 20 years, Matt Rendon has been making first-rate '60s-inspired psychedelic pop records under the Resonars name. His output has been remarkably consistent and ever faithful to the 1965-67 era of popular music. While Disappear does feature appearances from members of Rendon's live band on a couple of tracks, it was for the most part recorded entirely by Rendon in his home studio. As always, he wears the influence of The Byrds, Zombies, Hollies, and later '60s Who & Kinks on his sleeve. And as always, the quality of his songwriting and vocal arrangements is at a level comparable to the top bands of the psychedelic pop era.
Listening to Disappear, I find myself marveling that Rendon recorded those majestic harmonies all by himself. He's not just a one-man band; he's a one-man chorus! On this release, he moves seamlessly from the quintessential psych-pop of "My Fog" to the jangly proto power pop of "How Did You Get Here?" to the Beatlesque "No Little Plans" to the Pet Sounds influenced "Don't Ever Disappear" to the marvelous, Who-inspired "Brown, Baby". If it weren't for the vintage glam rock strains of "Let's Bring It On Home", you could probably be convinced that this album was actually made in 1966! The two cover selections (The Mamas and the Papas' "Even If I Could" and the Herman's Hermits hit "Don't Go Out in the Rain") are beautifully-executed and perfectly complementary to Rendon's originals.
There aren't many bands/artists that can get away with spending an entire career in the same stylistic lane. The Resonars are one of those few. If you could write psychedelic pop songs this good, why would you ever want to stop? And by operating (mostly) alone, Rendon has near complete control of his artistic vision. Disappear finds him excelling as a songwriter, singer, musician, and producer. The mid-to-late '60s is arguably the greatest of all eras of popular music. And as long as The Resonars are around, it never really has to end.
-L.R.
https://theresonars1.bandcamp.com/album/disappear
https://www.facebook.com/The-Resonars-114993301867228/
Posted by Lord Rutledge at 6:54 AM

The RESONARS are pure gold.