Hoodoo Gurus - "Get Out of Dodge" 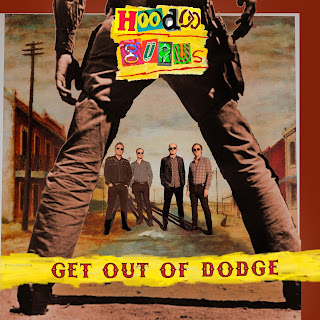 Well here's a band you might have heard of! The legendary Hoodoo Gurus are back with a terrific new single on their own label Big Time. "Get Out of Dodge" is a return to the band's classic power pop sound and features guest backing vocals from both Vicki Peterson (The Bangles) and John Cowsill (The Cowsills, Beach Boys). Not one to shy away from political topics or social commentary, Dave Faulkner wrote "Get Out of Dodge" as a statement on the hate, intolerance, and extremism that are sadly on the rise in today's world. The song is about how it's sometimes best to not engage with toxic people who are set on hating you. If these individuals are never going to soften their views, the best course of action is to just remove them from your life. "A good surgeon knows when a damaged limb can be saved and when it's better to amputate," Faulkner says of this song. "So cut your losses and get yourself to a better place, somewhere people will cherish and support you, and live to fight another day."
"Get Out of Dodge" was recorded back in June at Harry Vanda's Hercules Street Studios in Surry Hills (where the band had previously recorded Answered Prayers). Wayne Connolly engineered and assisted in the production of the track. The song is available now as a digital release and will be coming out on 7" record later this year (backed by the the recent anti-Trump number "Hung Out To Dry"). While COVID-19 forced the cancelation of Hoodoo Gurus' 2020 tour dates, you can expect to see them back out on the road next year along with a new album to mark their 40th anniversary as a band!
-L.R.
https://hoodoogurus.lnk.to/good
https://www.hoodoogurus.net/
https://www.facebook.com/hoodoogurus/
https://hoodoogurus.officialstores.com.au/
Posted by Lord Rutledge at 7:33 AM