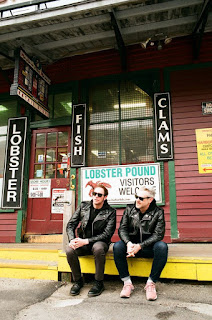 Oh man! The second advance single to drop from Kurt Baker's new album After Party is absolute GOLD! "I Like Her A Lot" is immediately recognizable as the fruit of the Kurt Baker/Wyatt Funderburk songwriting partnership. As talented as these two are individually, something magical happens when they work together. After Party, out later this month on Wicked Cool Records, will complete their trilogy of collaborative albums. "I Like Her A Lot" brings the '80s rock influenced power pop sound I fell in love with when I first heard Brand New Beat eight years ago! You've got guitars blasting over a strong melody, a simple but totally undeniable hook, and lyrics that appeal to the eternal teenager in all of us. What's not to love? If all of that wasn't already cool enough, the music video for this song is essentially the greatest trailer ever made for the cult classic horror flick Rock 'n' Roll Nightmare! If you've never seen this essential piece of cinema, you'll want to now. After Party will be out two weeks from tomorrow. Spoiler alert: it's great!