Guerrilla Teens - All The Hits 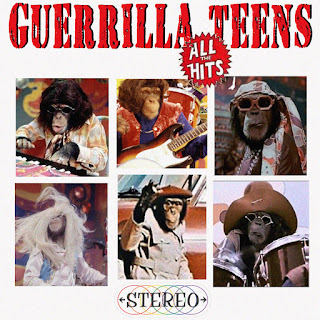 So we barely had time to cry in our collective beers over the breakup of the mighty Lovesores before Scott "Deluxe" Drake and Saul Koll resurfaced in the exciting new rock and roll force Guerrilla Teens. It was as if the music gods would not allow us to endure a pandemic without a ray of hope. Also on board were ex Humpers guitarist (and O.G. Lovesore) Jeff Fieldhouse, Epoxies/Sex Crime/Suicide Notes drummer Tim Connolly, and bassist Anna Anderson (Suicide Notes). Now that is a bona fide Portland, Oregon punk rock super group! Guerrilla Teens hit the ground running by recording ten killer demo tracks, which were released as five separate digital singles that came and went in the blink of an eye. If you snoozed, you lost. But now you get another crack at all these tunes....if you hurry!

Launched as a fundraiser for The Oregon Wildfire Relief Fund, All The Hits compiles all of Guerrilla Teens' COVID demos into one blockbuster digital album. This collection is not likely to be available permanently, so I advise jumping on it now! Just as it would have been an oversimplification to call Lovesores a reboot of The Humpers, it's not fully accurate to consider Guerrilla Teens a continuation of Lovesores. But it's no stretch to say that all three of the aforementioned bands are cut from the same cloth. No doubt about it, Scott "Deluxe" Drake is one of the greatest lead singers that rock and roll music has ever produced. After 35 years+ in the game, he sounds as fierce, focused, and fiery as ever. And now he's backed by an epic guitar tandem and a red-hot rhythm section. As you would expect, Guerrilla Teens don't veer too far from that sleazy '70s punk by way of the Stones and Chuck Berry lane ("Tell Me What To Do" and "Black Weather" could easily be mistaken for lost Humpers tracks). But with this particular band, I'm also sensing an affinity for old school garage rock and Stiv Bators inspired dark pop. There are plenty of songs here that will rock the snot out of you but also a few that suggest that Drake and friends have some tricks up their sleeve. And keep in mind that these are all demos recorded in isolation. If it's ever safe for Guerrilla Teens to mingle with the outside world, you all won't know what hit you.

Be sure to grab All The Hits while you still can. Your purchase will be donated to The Oregon Wildfire Relief Fund. And while you're at it, check out the new single "Barbie's Reality House" that just dropped yesterday. Rock and roll will save us all!