The Short Fuses - Dawn of the Deaf 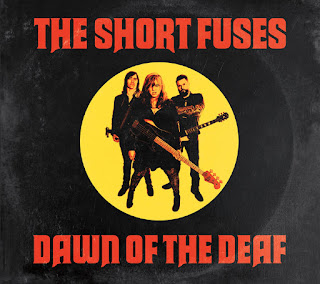 Can I get a Hell yeah!? One of the most monstrous rock and roll records of recent years finally gets a physical release! The Short Fuses unleashed their raging comeback album Dawn of the Deaf in April of last year. It was their first new album in nearly 16 years. And holy smokes, did this thing ever rip! Travis Ramin, Miss Georgia Peach, and Justin Staggs re-assembled as a trio and flat-out rocked it. Inspired by 2016 election rage and a fascination with horror that was a rite of passage for almost any 1980s East Coast punk kid, the band was revved-up to make the resistance rock record of 2019. And now it becomes the resistance rock record of 2020! Dawn of the Deaf is out today on the mighty Rum Bar Records. This just might be the hardest-rocking thing Lou has ever released. Not playing it loud ought to be against the law. In my quarter-century of reviewing records, I don't know if I've ever heard a more successful merging of hard rock and punk influences. And then you've got Georgia's powerful, soulful vocals taking it over the top (is there a more underappreciated singer in all of rock?). If you were raised on a steady diet of the MC5, Motörhead, the Dead Boys, and The Misfits, these 12 thundering tracks ought to be right up your alley. From the powerhouse opener "Baby Got Bat Wings" to the face-melting "Rock Yo Self (Until You Wreck Yo Self") to the resistance anthems "Furiosa" and "No" to the arena death rock of the title track to the epic instrumental "High Score", Dawn of the Deaf is an unrelenting force! Heck, there's even a cover of Jakkpot's "You Ain't Shit (Without a Leather Jacket)" that gives the original a serious run for its money!
In order to ensure that Dawn of the Deaf was as awesome of a rock and roll record as humanly possible, The Short Fuses enlisted a production team of legendary proportions. Daniel Rey produced the album. Adrian Popovich from Tricky Woo mixed it. Geza X mastered it. With all of that talent involved in the creation of this album, you had to know it was going to sound amazing and massive. More than a mere satisfying comeback, Dawn of the Deaf is The Short Fuses' best album by far. You can feel the passion, conviction, and energy that went into this record. And rather than overshadowing the message, these killer tunes make it all the more powerful. These songs were written and recorded well before the events of 2020, but their re-release at this exact moment in time could not be more fitting. If you're outraged by injustice in the world, this album ought to be your personal soundtrack to fighting the power. Crank up the volume, rock out righteously, and don't let the bastards grind you down!
-L.R.
https://rumbarrecords.bandcamp.com/album/dawn-of-the-deaf
https://theshortfuses.bandcamp.com/
https://www.facebook.com/TheShortFuses/
https://www.facebook.com/RumBarRecords
Posted by Lord Rutledge at 6:56 AM