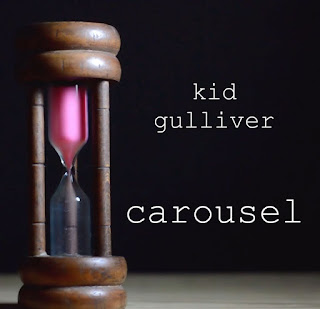 What a year it has been for Simone Berk! Already she has co-written and sung lead on WhistleStop Rock's single "Queen of the Drive-In", recorded an extraordinary version of "He Knows I Love Him Too Much" for the Goffin & King Foundation ISO BOOTH Cover Competition (she won!), and released a couple of tremendous singles with her power pop band Kid Gulliver. Now we can add a new Kid Gulliver music video to all of this excitement. "Carousel" was originally released in 2018 as part of Kid Gulliver's SPREE EP. The band decided to bring it back this fall as its latest single, and a brand-new video has been produced for the occasion. On the heels of the more straight-forward power pop of "Susie Survived Chemotherapy" and "i wanna be a pop star", "Carousel" is a dreamy and quite beautiful number. I love how the pretty melodies and tenderness of Berk's vocal only heighten the melancholy of David Armillotti's lyrics. The contrast between childhood innocence and adult disillusionment is a timeless theme in art, and here Kid Gulliver explores it in a moving and compelling way. It's a dandy little pop song that absolutely merited a rebirth in 2020. If you like what you hear, I recommend checking out the full EP!