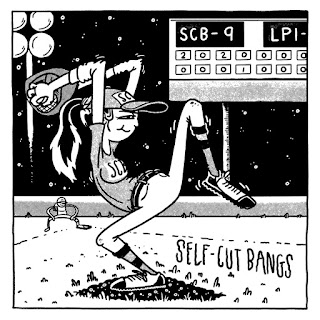 2020 will be forever remembered as the year of "pandemic rock". Isolated in their homes without anything to do but what they live to do, musicians of all walks of life have been recording in their bedrooms, basements, garages, kitchens, closets, and showers for several months now. In many cases, these artists have created this music just to stay sane or derive some enjoyment in trying times. But what happens when you make music just for the sake of making music - and suddenly you realize you've really got something? That's what recently happened to Cayley O'Neill (Dark Time) and Shawn Petsche (Napalmpom). They created the project Self-Cut Bangs as a way to kill time during quarantine. It started with writing and recording one song. This quickly grew into a tradition of spending every Saturday creating a new song, just for themselves. At some point, they listened to what they had and thought, "Hey, this is actually really good!". They decided to share their recordings with the world, and today the debut album from Self-Cut Bangs officially exists!

Beyond the fact that Self-Cut Bangs is the greatest possible band name for a pandemic year, I'm very thankful that O'Neill and Petsche did not insist on keeping their recordings private. They've given us one of the year's best albums. It doesn't really sound like Dark Time or Napalmpom. Heck, it doesn't really sound like anything else out there. This record is a combination of numerous cool things. In these nine songs, there are elements of everything from post-punk to power pop to glam to garage to punk to straight-up rock and roll. If anything, I might say that is a throwback to the indie and alternative rock of the '90s and 2000s. It's got huge hooks, thundering guitars and drums, and really fantastic lyrics that have meaningful things to say about our world. If "modern rock" were still a viable commercial radio format, I could easily imagine a number of these songs being hits. I'm kind of shocked that this album was home-recorded, because it sounds so massive. I had to wonder if these two actually live in a recording studio! In all seriousness, the very talented songwriter Lorrie Matheson mixed and mastered these tracks and did an an absolute bang-up job. "Pillow Talk" and "Perfect Posture" form as good of a 1-2 punch to start an album as I've heard this year. Both songs deliver knockout choruses that ought to compel the masses to sing along. The rest of the album ain't so bad either. I dig the variety, as Self-Cut Bangs maneuver their way through new wave/post-punk ("Ace"), crunching '90s alt-rock ("Time With You"), mega-cool glam rock ("Shapeshifter"), retro synth-pop ("Legends"), big riff hard rock ("Dying Is An Art"), and everything in between.

Minus the pressures and expectations that usually come with making an album, Self-Cut Bangs have produced an original and tremendously exciting work of rock and roll. Time will only tell if this turns out to be a one-off project or the start of the biggest band in the universe. But either way, the birth of Self-Cut Bangs must be considered one of the bright spots of 2020.