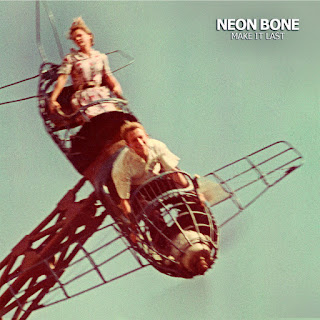 When it comes to classic pop-punk in 2020, Neon Bone is as good as it gets. Out on Monster Zero, Make It Last is the fourth album from this Münster, Germany based artist/band. It sounds very much like the previous three, and that's a very good thing! When you've got a winning formula, there's just need no to mess with it. In the case of Neon Bone, that winning formula mixes equal parts '90s Lookout! Records, later '50s/early '60s rock and roll & doo-wop, and the first four Ramones albums. Make It Last, like so much of the pop-punk music I love today, would be great pop even if it weren't punk. But it's plenty punk, and the bit on the press release about this being a band that "will get the kids and the 30+ crowd to start the pogo and spill beers" could not be more dead-on. Make It Last strikes a perfect balance between '90s pop-punk revivalism ("You're Eating My Brain", "I'm Coming Home", "Tripping"), oldies/rock and roll influenced numbers ("Baby, Don't You Cry", a cover of the old Ricky Nelson hit "It's Up To You"), and those sappy love songs that I can never get enough of ("Girl You Should Know", "I Got A Friend", "Don't Say No More"). If you're expecting anything new from Neon Bone, well this sure isn't it. But if you're seeking more of those buzzsaw guitars, silky-smooth harmonies, and songs about girls, it's satisfaction guaranteed. Get your vinyl here!
-L.R.
https://monsterzerorecords.bandcamp.com/album/make-it-last
https://neonbone.bandcamp.com/album/make-it-last
https://www.facebook.com/neonbone/
https://monsterzerorecords.com/
https://www.facebook.com/MonsterZeroPunkrock/
Posted by Lord Rutledge at 12:51 PM