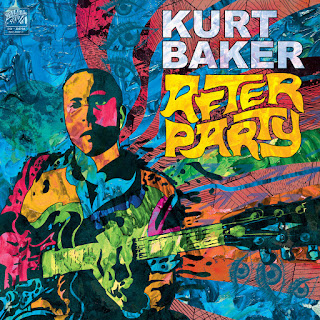 The band is back together! While I've always been a huge fan of all things Kurt Baker, there's a special place in my heart for Baker's collaborations with Wyatt Funderburk. When these two join creative forces, it's a one-way ticket to pop heaven! Baker and Funderburk co-wrote Baker's solo albums Brand New Beat (2012) and Play It Cool (2015) - two of my favorite records of the last decade. After Party, the third release in this trilogy, is coming out October 23rd on Wicked Cool Records!
After Party was recorded earlier this year (pre-pandemic) with the classic Kurt Baker Band cast in tow: Funderburk on guitar & synthesizer, Geoff Palmer on guitar, Kris Rodgers on keyboards, and Craig Sala on drums. Having had several years to absorb Brand New Beat and Play It Cool, I have come to the conclusion that the latter was even better than the former. And I fully expect After Party to be the best of three. Funderburk considers it to be the best record he's ever made by a long shot, and I've never had a reason to doubt him! "Over You" has been released as an advance single, and it's got that big guitar early '80s new wave power pop sound that I was hoping for. It features timeless lyrics about struggling to shake a breakup. And my god, if there's anything that still unites us all in this shit year 2020, it's that all of our hearts are breakable. Having lived new wave pop-rock firsthand, I've got to say that this song sounds like it could have come pumping out of a poolside portable radio 40 summers ago. From the super slick backing vocals to the dueling keyboard/guitar solos featuring Rodgers and Palmer, the touches on this song are to die for! While Rodgers and Palmer have seen their own solo careers skyrocket in recent years, neither was too busy to lend their musical talents to After Party.
The word on the street is that the full Kurt Baker Band will tour in support of After Party once life returns to something resembling normalcy. With that in mind, we have much to look forward to - both this fall and beyond. Circle your calendars for October 23rd!

Oh, man...what I would give to finally get to see him live. So looking forward to this album.