Field Day - "Everything, Everyone"/"The Next Day" 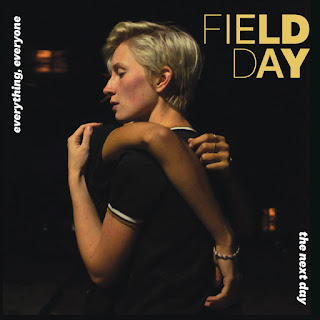 Out today from Boston foursome Field Day, "Everything, Everyone"/"The Next Day" is essentially a pair of singles released on one 45. Field Day features former Boston Globe rock critic Joan Anderman and her longtime colleague Dan Zedek on guitar and vocals. As you might expect, this duo's songwriting and musical aesthetic bring to mind the classic indie rock of '80s and '90s Boston. These new songs were recorded at Boston's Q Division studios with Rafi Sofer. What makes this such an appealing release is that the two tracks are so different from each other.

"Everything, Everyone", featuring Anderman and Zedek on dual vocals, has a warm, jangly feel to it that I would describe as textbook indie pop. I like that the song is on the mellow side but still packs a solid punch. Anderman and Zedek are a likable pairing on vocals, and the lead guitar on the track is absolutely dazzling. If you fondly recall late '80s/early '90s college radio, you need this song in your digital collection. "The Next Day", featuring Anderman on lead vocals, proceeds in a darker, more mysterious direction. The band achieves an extraordinary tone on this slow-burning rocker. The song is cool, elegant, and haunting all at the same time. I love the way the hard-striking bass lines and angular guitars support Anderman's captivating vocals and lyrics. I've been completely fascinated by this song - hanging on every word and taking it in as if it's a short film or story. I could not be more impressed. "The Next Day" is a true work of art. At no point could I just casually hear it in the background. I'm compelled to immerse myself in it.

"Everything, Everyone"/"The Next Day" is that rare pairing of four minute+ songs that don't drag. Each track unfolds into a beautifully developed work of passionate & literate rock. These tracks are being released as a limited-edition 7" record on Light of Day Records. They're also available via the usual streaming platforms. If you like what you hear, be sure to also check out Field Day's three excellent EPs via Bandcamp!