Muck and the Mires - Take Me Back To Planet Earth 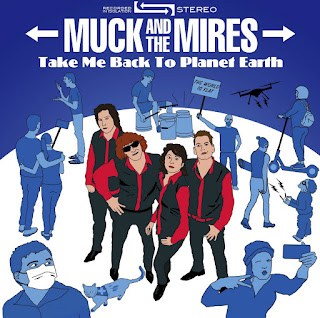 Don't call it a concept album, but Take Me Back To Planet Earth sure finds Muck and the Mires affected by the world we're living in right now. This mini-album was written while all the band members were under lockdown and coping with the frustration of not being able to play shows and entertain live crowds. With nothing else to do, Muck and the gang opted to go the 1967 Beatles route and become a studio band! So they wrote six brand-new songs, which they were eventually able to record at Q-Division Studios in Boston with Matthew Tahaney. The tapes were then shipped off to the legendary Jim Diamond, who proceeded to work his mixing and mastering magic. And so here we are!

Out now on Rum Bar Records, Take Me Back To Planet Earth is a vintage Muck and the Mires high energy garage rock and roll pop extravaganza. It was originally intended to lean in a power pop direction. But as these songs came to life, the band's love for the British Invasion and '60s garage rock ultimately prevailed. If these guys had the COVID blues, they sure didn't allow that to subdue their spirit. This is a super-fun collection of upbeat numbers that will have you dancing around the house and looking forward to the day when you can experience these songs live in the company of other human beings. Lyrically, Muck and the Mires have never been more topical. While not specifically inspired by the pandemic, the title track is about feeling alienated from the modern world and longing for simpler times. Similarly, "Six O'Clock Baby" explores technology addiction and the decline of real social interaction. Elsewhere, the band opines on the strange nature of modern love with the companion pieces "She Blocked My Number" and "Zoom Breakup". While these songs could not be more of a soundtrack to our present moment, I have a feeling that they will be very relevant well beyond 2020. Imagine a person from 30 or even 15 years ago time traveling to today and witnessing a world where relationships can be canceled with one touch on a smartphone and people gather in groups to stare at their screens individually. They probably would think they were on a different planet!

While a few of  its songs do say profound things about modern-day society, Muck and the Mires have approached Take Me Back To Planet Earth with a sense of humor (that cover art is a hoot!) and their usual commitment to making music that is meant to be thoroughly enjoyed. This isn't serious stuff. This is rock and roll, and it's absolutely great! Familiarize yourself with these songs now and be prepared to dance and sing along when it's finally safe to go out and see bands again. You know that when Muck and the Mires return to the stage, people are gonna go nuts!