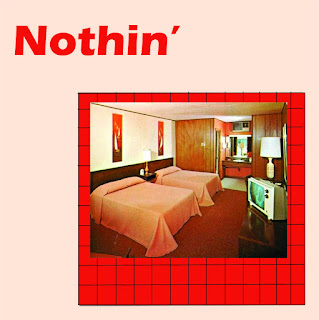 Nothin' is a funny and really cool name for a band. "Hey, what are you listening to?" "Nothin'!" Nothin' is based out of Columbus, Ohio. Lead singer Hillary Jones used to be in Pretty Pretty. And while there may be some similarities between the two bands, I suppose you could say that Nothin' is consciously less "punk rock". Nothin' rolls together power pop, '90s twee, and good, solid Midwestern indie rock and roll to create a sound that is simple and satisfying. Let's Pretend Records out of Bloomington, Indiana has released Nothin's self-titled cassette, which is chock full of fuzzy pop songs that will instantly have you tapping your toes and humming along. While Nothin' has branded its musical style "anxiety rock", these songs are more likely to relieve anxiety than they are to induce it. These are fun tunes that really rock, and there can never be too many bands doing that sort of thing. If you like good pop of any variety, this is a band you ought to look into. Jones has an appealing, matter-of-fact vocal style, and as a songwriter she sure knows how to a turn out a killer hook. Don't miss out on Nothin'!