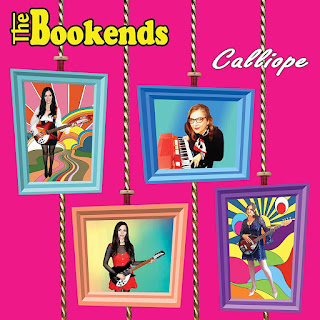 Out today on the legendary and iconic JEM Records, Calliope is the fantastic second album from American garage rock duo The Bookends. Karen Lynn (vocals, guitar) & Sharon Lee (vocals/bass/keyboards) have a special kind of chemistry. They are first cousins and have been inseparable since birth - hence the lifelong nickname "The Bookends". As the band The Bookends, Karen & Sharon blend their voices beautifully and dig deep into their shared affection for 1960s pop music. The 14-track Calliope was designed to be uplifting and exuberant - a veritable amusement ride for the soul. This is music that makes you feel good, and the absolute joy that went into this album's creation is apparent at all points. Musically, these songs touch on everything from the British Invasion to '60s garage rock to power pop to psychedelic rock. Evocative of amusement park fun and child-like wonderment, the title track demonstrates how to make a Beatles influence feel new and exciting in 2020. Listening to the bright and energetic "Face The Facts",  I can't help picturing The Bookends performing on a '60s TV show. "Stop Right There" is flawless 1970s-style power pop, while "Keep Keeping On" will have you merrily dancing around the house all night. Bursting with melodies and harmonies, "Make It Alright" and "Got To Tell You" are the blasts of sonic sunshine I truly needed at this moment in human existence. "She's Got It" sounds like it was lifted from the soundtrack of a '60s spy thriller. The radiant and symphonic "World" brings this ride to a blissful conclusion. It's not lost on me that "Calliope" and "World" are meant to bookend (no pun intended!) the upbeat and hook-laden rock and roll of the 12 tracks in between. The former is a tone-setter for an album that's sure to lift your spirits. The latter is like a warm summer breeze that comes upon you and assures you that everything is going to be alright. I always love an album that ends in such a way that I want to go back and listen to the whole thing again!
Calliope is a swinging success on all fronts. The harmonized vocals of Karen & Sharon, the album's feature attraction, are everything you would expect and then some. The songs are consistently spectacular. The musicianship (kudos to session players Buck Ellis, Ward Reeder, Larry Alvarez, and Frank Labor!) is top-notch. And the production is what all garage rock/power pop releases should aspire to. You could spend all day picking out the influences, which The Bookends wear on their sleeves. But even with its distinctive '60s flavor, Calliope is by no means an album limited to "retro" enthusiasts. The Bookends have given us a fresh take on timeless sounds, and each listen only delights me more. Pop people and garage rock enthusiasts, here's one for all of you all!
-L.R.
https://www.facebook.com/thebookends2/
http://www.jemrecordings.com/
https://www.facebook.com/Jem-Records-607560186079388/
https://thebookends.bandcamp.com/
Posted by Lord Rutledge at 7:35 AM

I heard one of their songs on SiriusXM. Just streamed this album. Really enjoyed it. These girls are fantastic!