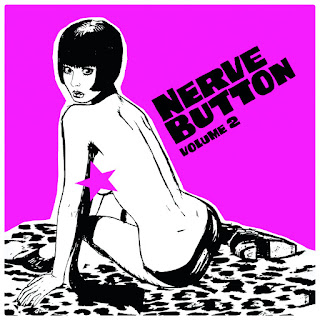 So if you're not yet hip to maritime sham glam, now is an opportune time to become so. By next year, it will be passé after it becomes the official soundtrack of the QMJHL bubble. Moncton, New Brunswick based goon squad Nerve Button is back with its first album in four years and first new recordings since January of 2018. The album title Volume 2 makes it clear that Nerve Button is still Nerve Button. And thank the heavens for that. Just in case another band tries to claim that they invented maritime sham glam, Nerve Button has cemented the phrase as its intellectual property by making it the title of Volume 2's opening track. In a brilliant move, the band chose to make its signature song an instrumental. So what is maritime sham glam? To my ears, it's '77-style punk rock created under the influence of North American proto-punk and U.K. junkshop glam (and probably a few other things as well!).
In very recent years, I've found my tastes in punk rock gravitating towards bands that don't take themselves at all seriously. I'm really into bands that are totally stupid, but in a smart sort of way. With that in mind, it all makes sense that a new Nerve Button album was exactly what I needed. I love the band's mix of a classic '77 sound and lyrics that fall into the tongue-in-cheek/of questionable taste/"That's so wrong!" category. Volume 2 is a super fun record full of dumb, obnoxious songs that ought to be played loud enough to irritate neighbors, passersby, spouses, and family pets. You can hear that throwback Canadian (by way of the U.K.) first wave sound on some tracks and a more overt glam influence on others ("Pink Jellybean", "Queen of the Tarts"). In a year in which angry and/or political punk music has been omnipresent (and not without good reason), songs about stolen underwear, getting sloshed, liking it "up the chuck", and the sound life philosophies that will keep you off of Dateline NBC are a welcome reprieve from all of the heavy seriousness of the moment. But while Nerve Button might like to goof around, its music is anything but a joke. Recorded live off the floor, Volume 2 is an absolute ripper of a record. The tunes are killer, and that guitar tone ought to be the envy of any garage/punk group. You may know some of these guys from famous infamous bands they've played in, but Nerve Button ought to be huge in its own right. Volume 2 is hands down the best punk rock album I've heard all year. Get it from Wanda Records!
-L.R.
https://wandarecords.bandcamp.com/album/volume-2
https://nervebutton.bandcamp.com/
https://www.facebook.com/nervebuttonband/
Posted by Lord Rutledge at 7:22 AM

Check the new manges (only 23min)