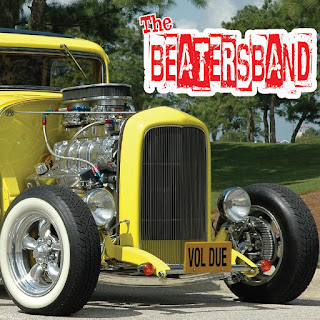 The Beatersband out of Italy operates under a cool concept. Formed in 2018, this trio aims to modernize the vocal music of the '50s and '60s by re-arranging it in a punk/pop/rock and roll style. In its choice of covers, the band especially emphasizes the rock and roll, girl groups, and doo wop music of the pre British Invasion years (1955-63). On its first release last year, the band produced a lively set of covers of Ritchie Valens, The Crystals, The Ronettes, Paul Anka, Bobby Freeman, and Elvis. Now The Beatersband are back with a second volume of covers. This time, the group tackles such songs as the Goffin & King/Shirelles classic "Will You Still Love Me Tomorrow", Neil Sedaka's 1960 smash "Calendar Girl", the Beach Boys' "Don't Worry Baby", and The Chantels' early girl group favorite "Maybe". Expanding their repertoire from just American music, The Beatersband also take on 1960s European hits by i Ribelli and Francoise Hardy as well the folk standard "If I Had A Hammer" in the style of Rita Pavone's cover version. I don't think I've ever reviewed a cover band before, but I really love the idea of this band and the way it's executed. Singer/guitarist Donatella Guida has a lovely, appealing voice. And while all of these songs have been given fresh arrangements, they retain the soul of the original versions. Whether you're into punk rock and roll or just plain rock and roll, you are sure to enjoy The Beatersband. I mean, come on: who doesn't love oldies?!
-L.R.
https://thebeatersbandvintagepunkrocknroll.bandcamp.com/album/vol-due
https://www.facebook.com/thebeatersvintagepunkrocknroll/
https://www.instagram.com/thebeatersband/
Posted by Lord Rutledge at 8:33 AM