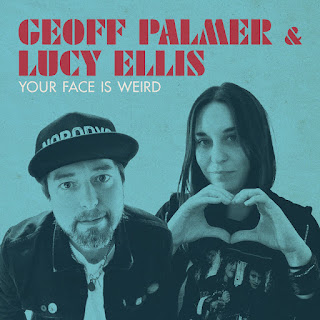 Hands down, my favorite song released this year is a cover of John Prine's "In Spite Of Ourselves" recorded by Geoff Palmer and Lucy Ellis. No matter how bleak life gets or how doomed this world seems to be, one listen to this recording always gives me a reason to smile. Palmer had been wanting to record this song for years, but it just never quite fit in with any of the records he was making. But once it became apparent that 2020 had been "canceled", Palmer reached out to his good friend Ellis and asked her if she would record "In Spite Of Ourselves" with him. She quickly said yes, and Palmer brought in his pal Zack Sprague to round out the band. In the wake of Prine's death from COVID-19 in April, the Geoff & Lucy version of "In Spite Of Ourselves" proved to be both an extraordinary tribute and a ray of hope in very dark times. Then came the delightful news that this was just the beginning of the Palmer and Ellis duets!

"In Spite Of Ourselves" was originally intended to be one half of a single on Stardumb Records. But these two had so much fun collaborating on recording and chatting about music over Zoom happy hours that they decided to just keep going! Not knowing for sure if any labels would release it, they made an eight-song mini-album. Out today on Stardumb Records on 10" vinyl and Rum Bar Records on CD, Your Face Is Weird includes six covers and two original songs. The idea of these two individuals forming an intercontinental super duo is beyond exciting. They are two of my favorite people in music today. They both have roots in the pop-punk scene and have since grown into two of our finest modern-day creators of pure pop songs. What I love about this project is that these songs are not bound to any specific genre. The idea was for Palmer and Ellis to just record some songs they loved that would be fun to cover. They also wrote a couple of originals that perfectly fit the vibe of the album.

If you're a fan of these two artists as I am, you surely had high hopes for Your Face Is Weird. Well I'm here to tell you: it more than lives up to expectations! The original number "SWIM" matches the pure delightfulness and joyful vibes of "In Spite Of Ourselves". It's a sweet pop song not too far removed from Lucy and the Rats - but with an obvious Geoff Palmer touch as well. In these cynical times, we need songs like this that bask in the wonders of falling deeply in love. It will warm my heart to no end if someone makes this their wedding song. That chorus ("Do that thing you do where you move slowly...") is nothing short of magical. It gives me the feels every single time! The other original "Crash" is a high-energy rocker reminiscent of the Beach Boys and first album era Connection. It's just so much fun. If Mike Love had sung co-lead on a Nikki and the Corvettes track, it would have sounded an awful lot like this! And with this album being three-quarters cover songs, it's fortunate that they're all terrific. Where else are songs by Kieran Kane, Blag Dahlia, Burt Bacharach, and Sam Cooke going to sound like they were meant to be on the same album? I love that these two weren't afraid to take on beloved songs that some people would probably consider untouchable. Seriously: no one will ever do "In Spite of Ourselves" better than John Prine and Iris DeMent. But Palmer and Ellis have come darn close, and in the process they've turned countless individuals into John Prine fans. And while Kirsty MacColl's "They Don't Know" is one of the most perfect pop songs ever written, Palmer and Ellis just might have made my second-favorite version ever (and that's no slight to The Speedways or Tracey Ullman!). How do you top Sam Cooke's "Having a Party"? Well, you don't. But if you're Geoff Palmer and Lucy Ellis, you work up a super fun version that essentially serves as a theme song for the entire album.

It can be hard to view the glass as half full (or even a quarter full) in a year like 2020. But when Geoff Palmer found himself with time to kill, a door opened to a duet with Lucy Ellis that quickly turned into a full-fledged musical partnership. Had 2020 gone a different way, this dream pairing of pop titans may have never occurred. As expected, these two sound great together. And Your Face Is Weird definitely gives you a taste of what those virtual happy hours were like! To wish for a sequel seems a little greedy, so I'll just focus on enjoying one of this year's true feelgood albums. Vinyl is available in Europe from Stardumb Records and in the USA from The Machine Shop. You can also get the CD from Rum Bar Records  and the cassette from Memorable But Not Honorable!