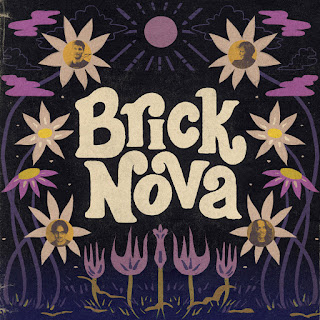 Brick Nova, a foursome from the Philadelphia area, has just released its third album. This self-titled long player is a fine example of music that doesn't really fit into any category beyond the broad umbrella of "alternative" rock. I can hear the influence of everything from power pop to '90s college radio to classic rock to "post-grunge" to 1970s AM radio pop. I guess you could call these guys "indie rock", but what the heck does that even mean? I'm reminded of people I knew in college who would talk of their "eclectic" tastes in music while I rolled my eyes in suspicion. But for real, Brick Nova totally pulls off eclectic! On this album alone, there are songs that bring to mind Teenage Fanclub, Weezer, Big Star, The Strokes, Alice In Chains, and Jack Johnson. And it works! At the end of the day, what matters is that the music's good! Opener "Good Luck" is laid-back guitar pop shooting off a warm breeze of melody. If "(Perpetually) Tired" were any catchier, Governor Wolf would shut it down in a heartbeat. "Hey, My Friend" sounds like '90s indie rock and '70s soft rock had a baby. "Dreaming" is a sweet & timeless pop gem. "City Girl" somehow combines hipster cool with genuineness and charm. "Hold" is a well-executed and exceptionally pretty ballad.
Brick Nova is the kind of band that exemplifies the spirit of independent music. These guys like all kinds of different music and bring it all together without any creative limitations or need to define themselves in terms of genre. What is coherent across these 14 tracks are an undeniable flair for melody and a totally unaffected quirkiness. This is an album that's pleasant to listen to but also really interesting. It's got much of the spirit of the indie/alternative music I came of age to, yet it also feels young and cool in the context of 2020. I like that these songs challenged me. I didn't know what to make of them on first listen. But as I went back to them, I found myself wanting to hear them over and over again. And isn't that what good music is all about? Good stuff from my corner of the globe!
-L.R.
https://bricknova.bandcamp.com/album/brick-nova
https://www.facebook.com/bricknovaband
https://www.bricknovaband.com/
Posted by Lord Rutledge at 7:30 AM

Thanks for this recommendation! And as usual, I had no idea this band ever existed. A strong case can be made that Philadelphia is ground zero for guitar-based rock music (of infinite varieties!) in the US right now.