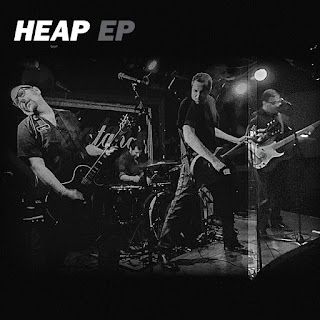 The mighty Heap returns! Legends of New York City punk rock and roll since the mid-'90s, Heap have a new self-titled EP out on Rave On Records. Produced by Eric "Roscoe" Ambel, this three-songer is truly all hits and no shit! On this collection of tunes, Tim Heap shows why he's the patron saint of fuck-ups, beautiful losers, tough luck cases, and perpetual outcasts everywhere. This man is one of the most underrated songwriters out there. He continues to combine boozy rock and roll a la Johnny Thunders, The Replacements, and the Dogmatics with a clever, insightful, and devastatingly funny lyrical vision. "No Mas" is of course inspired by the famous Roberto Duran quote. On this trashy rock and roll meets power pop number, Heap reflects on "things that used to be that aren't anymore". Lyrics like "I've never been the right amount of drunk...or punk" are truly classic Heap! "Renting" is literally about renting - and figuratively about how we're all fighting an uphill battle until the day we die. Who can't relate to that? The high-energy rocker "You Remind Me of Me" is one of those "it's funny because it's true" type songs - exploring how we often take an immediate dislike to people who remind us of the worst parts of ourselves. "You remind me of me...when I'm being an asshole" has to be the line of the year!

It has been a number of years since Heap released new music, and clearly the band had some great material stockpiled for this new release. Any of these three songs could have been an A-side in its own right.  Together, these tracks form an absolutely unstoppable release. Tim Heap has written a trio of profound songs touching on the universal themes of impermanence and self-loathing. And as always, he and his band mates (George Chambers on lead guitar, Paul Koenigsberg on bass, and Frank Saitta on drums) demonstrate how to play rock and roll with hooks and heart. If this EP leaves you wanting more, head on over to Bandcamp and dig into the classic Heap long players Don't Call Us We Already Broke Up and Heap on the Cheap!