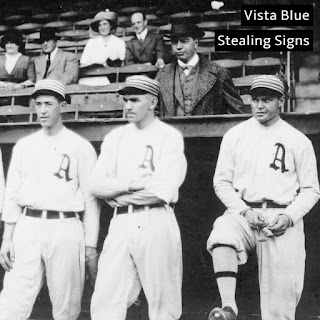 You see the cover art and the title. You see the name of the band. I know what you're thinking: Vista Blue released a baseball song for opening day again? Well guess what -- Mike threw that speedball by you! You were expecting something about the Houston Astros maybe, but you got...a love song! Isn't that what you wanted in the first place? "Stealing Signs" is the title cut from Vista Blue's new EP -- which Mike and Mark recorded in Nashville this past winter. It's a vintage Vista Blue blast of power pop influenced pop-punk (or maybe vice versa). The melodies are memorable, the harmonies are on-point, and the baseball metaphor is a brilliant touch. And I always love a pop group that appreciates the value of a nicely executed fadeout ending. Vista Blue knocked this one out of the park! The rest of the EP is a nice hodgepodge of new songs, cover tunes, and previously released songs. "She's Not the One For You", which first appeared on the Ramonescore Radio Records Rock Against Cancer compilation, is some buzzing pop-punk to get your toes tapping. You could probably make an argument that this song is the "hit" of the EP, although I'm still partial to "Stealing Signs". I will ask Nick Spoon for a ruling. "Bryan Funck Ripped Us Off" is a new version of an old Robinsons song. "Saturday Night" was recorded for a Mutant Pop Records tribute album coming soon on Ramonescore Radio Records. I love the cover choice, and I love the version (early Wanna-Bes had to have been an influence on Mike's songwriting). The original number "I Miss You" is 83 seconds of perfect pop-punk. As everyone east or west of the Rockies knows, "Safari" was originally done by Parasite Diet on its 2017 album Coast To Coast.
It never really feels like Major League Baseball opening day if it's not accompanied by a new EP from Vista Blue. And while there are technically no songs about baseball on Stealing Signs, it still feels good to have this EP on repeat today as I enter the realm of despair, disappointment, and dashed hopes that is another Philadelphia Phillies season. I always feel like I'm being unfaithful to pop-punk Vista Blue when I so heavily praise the band's more power pop leaning releases. Well on this release, the band is definitely flexing its pop-punk chops -- and I love it!
-L.R.
https://wearevistablue.bandcamp.com/album/stealing-signs
https://www.facebook.com/wearevistablue/
Posted by Lord Rutledge at 11:59 AM