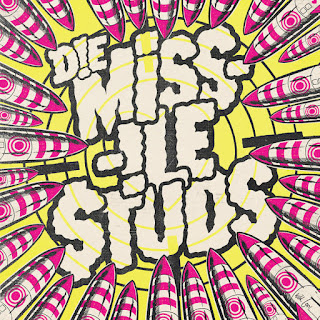 Well I've got myself a new favorite album of 2021! The Missile Studs, representing as always for Shitsville, South Australia, have unleashed a firecracker of an LP that you're sure to enjoy if you're as obsessed with U.K. '77 punk rock as I am. With Love From The Missile Studs contains nine tracks -- a few of which will be familiar to you if you bought the band's split LP with Thee Evil Twin last year (and if you didn't, what's the matter with you?). This, my friends, is what punk rock ought to be: simple, snotty, and so stupid that it's brilliant. No song exceeds two-and-a-half minutes, and no fourth chord is required at any point. The album is bookended by two different versions of "Missile Studs Theme" -- which by all rights should be Australia's national anthem. In between are songs with titles like "Brain Damaged", "Sooo Useless", and "Kill Me Pills". I'm sure you get the picture. If Sex Pistols/Clash/early Damned is your sweet spot for punk music, The Missile Studs are the band for you. They even do a killer version of the Buzzcocks' classic "Boredom"! Whether you're swilling pints of beer, pogoing around the house, or flipping off anyone within your sights, With Love is the soundtrack to a swell time. It officially releases on vinyl next month on Dirtyflair Record Company, Stamp Out Disco, and No Front Teeth Records. But you can preorder and/or download today!
-L.R.
https://dirtyflairrecordcompany.bandcamp.com/album/with-love-from-the-missile-studs
https://stampoutdisco.bandcamp.com/album/with-love-from-the-missile-studs
https://www.facebook.com/missilestuds/
https://www.facebook.com/dirtyflairrecordcompany/
https://www.facebook.com/stampoutdiscosydney/
Posted by Lord Rutledge at 7:07 AM