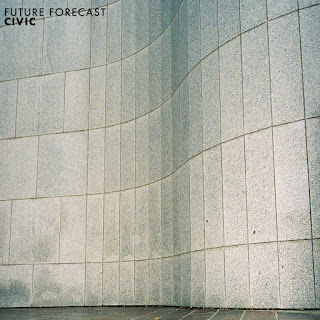 Oh boy, Australian punk music continues to be absolutely on fire! It would be hard to identify just one band at the top of the current crop of killer Aussie punk groups. But you could sure make a very strong case for Melbourne-based Civic -- who have finally unleashed a debut full-length album after knocking us senseless with a handful of great EPs and singles. Out on Flightless Records, Future Forecast builds on Civic's scorching proto punk/rock and roll output of recent years. The band's attack remains as aggressive and hard-hitting as ever, yet it adds new layers of complexity and stylistic variety. Much like another fantastic Melbourne punk band Stiff Richards, Civic has utilized the long playing format to take a massive step forward. No doubt, the influence of The Saints and Stooges still rears its beautiful head. But on Future Forecast, Civic sounds like a band that has fully come into its own and is poised to define what punk rock ought to be in the 2020s. On fierce cuts like "Another Day", "Hollywood Nights in Hamburg", and the ripping opener "Radiant Eye", the band rages at full force and smashes anything in its path. Elsewhere, the foursome eases back on the tempo (but not on the power) on more sophisticated slow-burners such as "As Seen On TV", "Tell the Papers", and epic closer "Come To Know". Along the way, the band also flirts with hardcore ("Just A Fix"), strange post-punk ("Sunday Best"), and old school noise rock ("Shake Like Death"). Put it all together, and you've got yourself a brilliant punk rock album. Of course it has roots in classic Aussie punk, but this is no rehash of old standards. Civic has got its own thing going on, and we ought to just turn up the volume and enjoy it!
-L.R.
https://civicivic.bandcamp.com/album/future-forecast
https://flightlessrecords.bandcamp.com/
https://flightlessrecords.com/
Posted by Lord Rutledge at 2:49 PM

Thanks for highlighting this band! I am really enjoying this record. As you say in your review, the songs are very diverse, which keeps things interesting from start to finish.

Awesome album of the Australian band CIVIC. They sound like a steamroller that destroys everything in its path. I love those Australian guitars that remind me of bands like NEW CHRISTS, THE YES-MEN, READIO BIRDMAN, THE SAINTS, ..... thank you Josh for discovering me about this great Australian band.
I love this video live from CIVIC https://youtu.be/3jn4SMEIEh8