The Dictators - "Let's Get the Band Back Together" 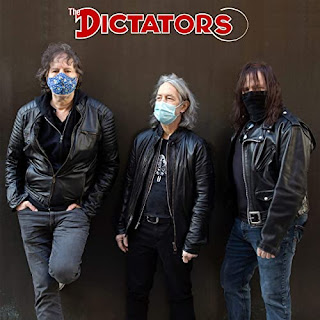 How great it is to live in a world in which The Dictators again exist! Having already released the anthem "God Damn New York" back in January, the recently reformed Dictators have returned with another new single that will delight longtime fans along with anyone else who truly "gets" rock and roll. Some of you may recall that Andy Shernoff released "Let's Get the Band Back Together" as a solo track back in 2012. Well, the song has been properly "Dictatorized" for re-release in 2021! One listen to this song will confirm that The Dictators are in vintage form --- rocking as hard as ever and refusing as always to to take themselves seriously. It's seems corny to call it a "comeback", so let's just say that this has been a triumphant return! And would you expect anything less from a band that made one its best albums nearly three decades into its existence?

It has been a good news/bad news situation with The Dictators lately. While it's exciting that Andy Shernoff, Ross the Boss, and Scott Kempner (along with old pal Albert Bouchard) rebooted one of the greatest bands of all-time, Kempner is sadly leaving the group due to health reasons. He was a driving force behind the band's reunion, and to call him a legendary figure in rock and roll is no understatement. While he won't be on stage when the band returns to live shows, he will forever be a Dictator.

2021 could end today, and we'd have to call it a good year since it gave us two great Dictators singles! Can we expect more? Stay tuned!