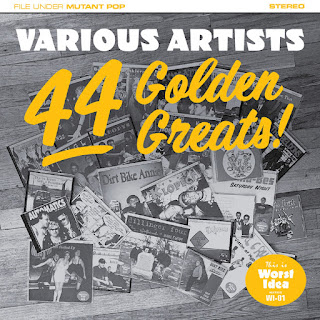 Had Poppy Robbie not double-dog dared me to tackle the 44-track Mutant Pop Records tribute compiled by Grath Madden and Chadd Derkins, I might not have even bothered. I have presumed that anyone who would be interested in hearing a quadruple album Mutant Pop tribute has already purchased it. That's how passionate the fan base remains after all of these years. And so here we have 44 Golden Greats -- lovingly assembled by two of the most passionate of all of those fans.

While a 44-track tribute album is a grand and ambitious project, anything less might have seemed unsatisfactory. We're talking about a label with over 100 releases! Mutant Pop was a label I steadfastly championed throughout my up-and-coming years in the record reviewing racket. 20-25 years later, it's fun to look back at particular MP releases and examine which ones I still really like and which ones I can't believe I ever liked in the first place! Today I rank The Kung Fu Monkeys as my #1 favorite Mutant Pop band by far --- followed by The Automatics and Ruth's Hat. I was excited to see all three bands well represented on 44 Golden Greats. But as a true fan of the label, I was also stoked that this tribute doesn't neglect lesser-known and overlooked players in the Mutant Pop story. This collection would have been far less cool without representation for the likes of Spodie, The Beldons, Dead Like Elvis, and The Hitchcocks. And holy smokes: there are two Buglite covers on this release!

What I like about 44 Golden Greats is that the majority of the bands/artists went to the trouble to creatively interpret the original songs. Obviously we're all pop-punk fans here (otherwise you wouldn't have read this far!). But I doubt any of us wanted to hear 44 cover songs that sounded exactly like the original. Probably the most "faithful" cover that actually works here is Doc Hopper's ripping rendition of Boris the Sprinkler's "Drugs and Masturbation", and that's largely due to the track opening with Joe Keller's brilliant and truly hilarious spoof of a Rev. Norb monologue. You'd have to have a heart of stone to not be delighted by The Steinways' version of Dirt Bike Annie's "What's Happening, Hot Stuff?". But the real highlights for me are the versions that honor the originals by transforming them. It almost goes without saying that the Kung Fu Monkeys' interpretation of The Hissyfits' "In My Dreams" is beautiful and perfect and extraordinary in every way. Poppy Robbie gets points for covering one of the best Automatics songs ("No Big Deal") and making it sound like...a Poppy Robbie song! I was previously unfamiliar with Nicky Reynolds and his Pushers, but I love, love, love, love the band's take on After School Special's "Kelly Burkett"! Jeanie Lee's version of Egghead's "Donna's Always Mad At Me" is a royal treat for all of us who can never get enough of Jeanie Lee...or Egghead! Also really excellent are covers by Andrew Furtal (Dirt Bike Annie's "All Systems Go"), P.J. Sloan of Ruth's Hat (The Proms' "May I Cut In"), and Dr. Princess (The Wanna-Bes' "ATM"). And you've gotta love Skinny Genes (which is Azeem from The Steinways) doing a clever mashup of Moral Crux's "Firing Squad" and the Ramones' "She's the One"!

Chances are that if you're a Mutant Pop Records fan, you don't need me to tell you that 44 Golden Greats is worth buying -- because you've already bought it! But if you haven't bought it yet, you certainly should. It's a wonderful reminder that a lot of incredible music was released on the Mutant Pop label. And you can feel the love that went into the creation of this project. Many of the artists appearing on this collection are Mutant Pop alumni paying tribute to other Mutant Pop artists. A few others represent the best of the generation of pop-punk that was directly inspired by Mutant Pop. And seriously: 44 tracks for five bucks is a deal and a steal! All proceeds from this digital release go to the Kentucky Association of Sexual Assault Programs.

-L.R.
https://worstidea.bandcamp.com/album/44-golden-greats
Posted by Lord Rutledge at 7:15 AM