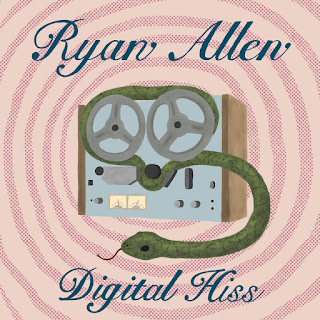 It's almost guaranteed to be a good sign when an email from a musician begins with "I know I'm a complete nutcase and can't stop releasing stuff!" Well, Ryan Allen is no nutcase. But it's true that he can't stop releasing music. And if I were as talented as Ryan Allen, I too would release music as frequently as possible! Digital Hiss is Allen's ninth release in the last ten months (yeah, really!), and the concept is based on a 4-track recorder he received for Christmas one year as a teenager. He never actually recorded songs on that 4-track (it got loaned to a friend and eventually went missing). But if he had, they likely would have sounded quite a bit like the songs on Digital Hiss. Allen mentions Eric's Trip and Sebadoh as specific influences on this release. More broadly, I'd describe this album as loud, fuzzy, lo-fi indie rock. Unbelievably, the entire EP was written, recorded, and mixed in a single day. Now that's what I call DIY! But just because it's DIY and lo-fi doesn't mean that it's just noise. Allen's knack for loud, simple pop songs of the highest quality is on full display here. I'm reminded of my own roots in underground music -- which was listening to college radio in the early '90s. Honestly, most of these tracks sound like they could be Extra Arms songs if they were worked out with a full band and more fully produced. But the whole point of this project was to replicate the ear-battering majesty of the fuzzed-out indie rock of yore. Mission accomplished! It blows my mind that Allen was inspired enough to write and record all of this material in a single day. This is really great stuff. I'm all for crafting a song over weeks or months if that's what it takes. But there's also something super cool about having that wild burst of creativity and getting everything down on tape while the inspiration is fresh in your mind. It's clear that Ryan Allen has been a remarkably prolific recording artist over the past year. But he's not just been putting out a ton of music --- he's been putting out a ton of really good music! Digital Hiss is very much up to his usual standards and highly recommended to any fan of noisy pop!
-L.R.
https://extraarms.bandcamp.com/album/digital-hiss
https://www.facebook.com/ryanallenandhisextraarms
https://www.extraarmsband.com/
Posted by Lord Rutledge at 6:16 PM