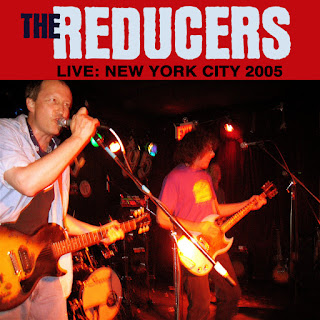 The Reducers are a must-hear band for any follower of this blog. Just as punk music was shifting in the hardcore direction in the early to mid '80s, The Reducers were fully embracing old style punk rock with roots in pub rock and roll. In the '90s and 2000s, The Reducers fit right in with the burgeoning garage punk movement and the newer generations of traditional punk rock bands. The joke about The Reducers was that they were the best band you'd never heard. Except in our world, they were heard by plenty! The group existed for nearly 35 years with one constant lineup: Hugh Birdsall and Peter Detmold on vocals and guitar, Steve Kaika on vocals and bass, and Tom Trombley on drums. The Reducers LIVE: NEW YORK CITY 2005, originally released as a New Year's treat for fans, is now getting a proper digital release on Rave On Records. The album captures The Reducers' live performance at Arlene's Grocery in New York City from June 4, 2005. Longtime fans will definitely enjoy this set -- which features songs from all of the band's LPs along with some non-album tracks and a few choice cover selections. And if you're not yet familiar with The Reducers, this album would be a perfectly good place to start. It captures a vintage Reducers performance. There's very little fooling around or idle banter -- just great high-energy rock and roll delivered by a tight band in top form. The band knocks out 16 songs in 47 minutes, and the quality of this soundboard recording is top-notch. The material runs the gamut from the early classics ("Let's Go", "Out of Step", "Bums I Used To Know") to more recent favorites ("Nothing Cool", "I Don't Mind"). And the cover choices (The Boys, Chris Spedding, Rolling Stones, Teengenerate) give you a great feel for the variety of musical influences that informed The Reducers. If you like what you hear, you should definitely check out all of the other Reducers releases available from Rave On Records. In particular, the best-of collection Redux is essential listening for any fan of old school punk and pub rock. The Reducers LIVE: NEW YORK CITY 2005 is indeed a treat for old fans -- and an opportunity for new fans to become acquainted with one of the best bands ever!
-L.R.
https://reducers.bandcamp.com/album/live-new-york-city-2005
https://www.facebook.com/RaveOnRecordsRock
Posted by Lord Rutledge at 3:19 PM