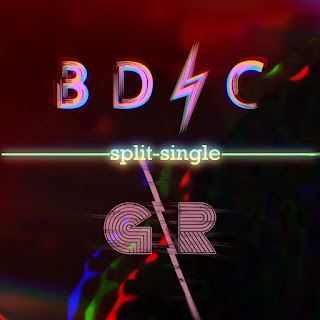 I've got something super cool for the power pop crowd today! A few months back, I featured a singles collection from the Chicago based label Big Blast Records. Big Blast is your home for hooky, guitar-heavy rock and roll. Two of the standouts from the label roster have come together to release a new split single. On the track "Tremor Control II", Bishop's Daredevil Stunt Club taps into the craziness and non-stop anxiety that was the year 2020.  If you enjoyed the arena rock leanings of the band's song "X Play", you will also dig "Tremor Control II" -- which channels Cheap Trick by way of The Cars. The concept of the song is that the more we told ourselves to calm down last year, the less calm we actually became. A lot of these lyrics really make me chuckle because they bring to mind my own COVID anxieties. I, like the protagonist of this song, would constantly check my temperature and obsess over the most minute deviation from the norm. But who am I kidding by using the past tense -- I'm still doing it! Golden Richards is one of my favorite new bands on the power pop scene these days, and the band's half of the split does not disappoint. "Zach Attack" is a tribute to Gil Golden's cousin Zach who passed away last fall at the age of 24. The song celebrates the positive impact that Zach made on the lives of friends and family members. And it's a reminder that his spirit lives on. This spirited, high energy rocker takes much of its musical inspiration from The Posies. For this recording, Gil, Billy, and Maryann had the pleasure of working with a couple of highly esteemed guest players: Darby Todd (Martin Barre Band) on drums and Lee Pomeroy (Jeff Lynne's ELO) on bass. If you're going to do a tribute song, this is the way to do. This song is full of unstoppable hooks and an undeniable joy. Proceeds from downloads of "Zach Attack" will be donated to Shatterproof -- a national nonprofit organization dedicated to transforming addiction treatment, ending stigma, and supporting communities.

It's clear to me by now that anything that comes out on Big Blast Records is essential listening for fans of melodic, powerful pop. Bishop's Daredevil Stunt Club and Golden Richards have delivered two hits in one release. If this had come out on a 45, it would have been a true double A-side! This is a perfect two-fer to crank in your car on a lovely spring day, so grab yourself a download now!