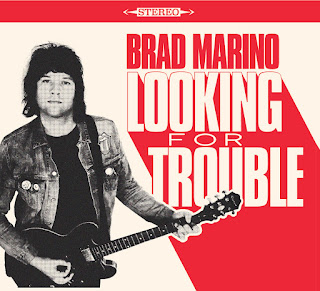 All year long, I've been counting the days until the release of Brad Marino's second full-length album! The album's first teaser single, "What Do You Know?", was released in January. A second teaser, "Even The Score", came out in March. This all led up to Looking For Trouble being perhaps my most highly anticipated album release of 2021. Well release day has finally arrived, and Looking For Trouble does not disappoint! Out today on CD on Rum Bar Records (with digital and vinyl releases from Spaghetty Town Records, Beluga Records, and Ghost Highway Recordings coming soon), Looking For Trouble is very much up to the tall task of topping Marino's superb debut Extra Credit.

While Marino did enlist several talented friends (Craig Sala, Bobby Davis, Chris Barnard) to play on this release, he remains a veritable one-man band: playing guitar, bass, keyboards, and drums while producing and mixing the album himself. In classic Marino fashion, this is an album full of simple rock and roll songs with great lyrics and killer hooks. There aren't many people who do it better! What I enjoy about this album in particular is that it features a great variety of songs. No two tracks sound the same. Marino touches on just about every sub-style of rock and roll that he's ever been known for. That includes everything from twangy, Stonesy numbers ("Even the Score") to stripped-down rootsy rockers ("Taillights Fade") to upbeat British Invasion style pop hits ("Take Your Time") to Ramones-inspired earworms ("To Bleed") to top-notch surf rock instrumentals ("Tripwire") to vintage Brad Marino shots of power poppin' garage rock and roll ("Something For Nothing"). "Local Show" -- which will strike a chord with anyone who has ever endured the struggles of trying to make it in a band -- is one of Marino's finest songs to date. Also included are new mixes of a couple of old favorites: "False Alarm" and "At Night". When favorite artists of mine re-record old songs, I almost always find myself preferring the original versions. But I've got to hand it to Marino here: he managed to make both of these songs even better! These tracks bookend the album's outstanding second side. You've got to love a record that finishes just as strong as it starts!

I love that Looking For Trouble is everything you could want from a Brad Marino album without being a copy of Extra Credit. Marino, who excels at blending no-nonsense rock and roll with catchy pop melodies, is very much in his element on this release. But the album also shows a progression in Marino's artistry. It's cool hearing him experimenting with new instruments (like slide guitar) and widening his stylistic repertoire. He shines not just as a songwriter but also as a singer and musician. And isn't that the whole point of making solo records? Looking For Trouble is so stacked with great tunes that I'm having a hard time choosing a favorite. Whether I'm in the mood for something poppy, punky, or straight-up rocking, this album always hits the spot. If you're looking for a modern-day example of what rock and roll is all about, it doesn't get much better than this.