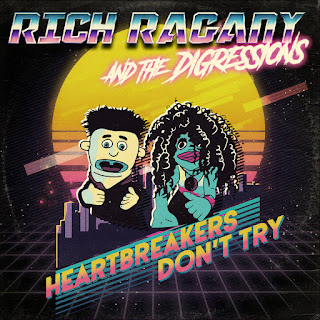 Rich Ragany is no stranger to this blog. I have reviewed four of his albums -- three that he made with his band Role Models as well as his brilliant solo debut ...Like We'll Never Make It. I even interviewed him back in 2018. In my book, Rich Ragany is one of the finest songwriters in all of rock and roll. As Ragany began working on solo endeavors a few years back, he collaborated with a number of talented friends of his. So strong was his connection with all of these players that they ended up becoming his full-time band The Digressions. The full band is Ragany on vocals and guitar, Kit Swing (Mallory Knox, Seven Days and Doesn't Die) on vocals and guitar, Gaff (Glitterati and Dedwardians) on lead guitar, Ricky McGuire (UK Subs, The Men They Couldn't Hang) on bass, Simon Maxwell (Role Models, The Loyalties) on drums, and longtime Role Models producer Andy Brook on keyboards. While it has been a number of years since ...Like We'll Never Make It came out, we can look forward to a new album from Rich Ragany And The Digressions coming soon. While we wait, we can now enjoy the band's brand-new single "Heartbreakers Don't Try". It's a tune that's very serious and totally uplifting all at the same time. Ragany describes it as a song "about the fight you can have with depression... and that great feeling of just standing up and taking on the day, week, or challenge." Ragany has written some absolute gems over the years, and this one is up there with the best of 'em. That hook is classic Rich Rags, and the lyrics absolutely knock me out. Brook on keyboards and Swing on backing vocals turn in stunning performances that push this track to a whole other level. This, to me, is song of the year for 2021 so far! Be on the lookout for a full album arriving this summer. In the meantime, don't miss "Heartbreakers Don't Try". And be sure to grab ...Like We'll Never Make It if you haven't already!
-L.R.
https://richraganyandthedigressions.bandcamp.com/track/heartbreakers-dont-try
https://www.facebook.com/richraganyandthedigressions/
Posted by Lord Rutledge at 8:35 AM