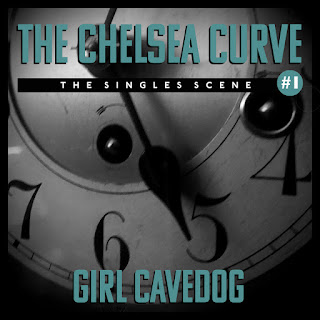 Wow, has Justine Covault ever hit the ground running with her label Red on Records! Since its launch five months ago, Red On Red has already released or reissued music from 13 different bands/artists -- all of them Boston based. I haven't even come close to keeping up (shamefully I even missed a new Justine and the Unclean single in February!). But it's not about quantity -- it's about the quality. No city on the planet has a stronger music scene than Boston, and the Red On Red roster is perfectly representative of that. If you dig power pop, punk, garage, indie rock, Americana, etc., this label is a must-follow even if you have no particular connection to Boston. A case in point is the debut single from The Chelsea Curve -- a mod-pop/indie rock trio made up of Linda Pardee (formerly of Boston legends Miles Dethmuffen) on vocals and bass, Tim Gillis on guitars and vocals, and Ron Belanger on drums. This band has been ripping up the Boston live scene for a while, and now it finally presents its first studio release. The track is called "Girl Cavedog", and it's a stone-cold hit. It's essentially a love song, but it's a very original and fascinating love song in the respect that it was inspired by time travel.  Pardee says it's about "a person whose life is repeatedly sidetracked by the comings and goings of a significant other who is a step out of time". What a wonderfully creative idea! Fortunately, the lyrics are included on the Bandcamp page -- and they read like a miniature short story! Musically, the song exemplifies mod-influenced power pop. Clocking in at two-and-a-half minutes, it features tight musicianship and irresistible hooks. And Pardee's voice will totally knock you out. I'm left wanting more -- which is the whole point of a single! Thankfully, this is just the first in a series of singles that will all lead up to a full album in the fall. Check out the brand-new video for "Girl Cavedog" embedded below!
-L.R.
https://redonredthechelseacurve.bandcamp.com/
https://www.facebook.com/thechelseacurve
https://www.facebook.com/redonredrecords/
Posted by Lord Rutledge at 10:48 AM