Priors - My Punishment on Earth 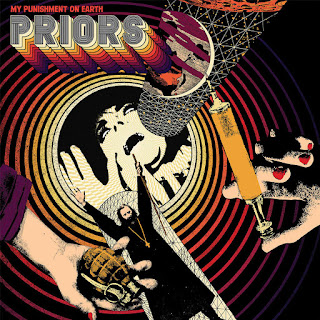 It has been a couple of years since I last checked in on Montreal's Priors. My Punishment on Earth, the band's third LP, was due out last year but had its release delayed due to the pandemic. It was written and recorded prior to the events of 2020, yet it could not be a more fitting release for this particular moment in time. It's full of darkness, dread, and anguish -- as if Chance Hutchison and his bandmates are letting loose a year's worth of internalized tortures. If the band's last album New Pleasure was a startlingly progressive take on garage-punk, My Punishment on Earth is the logical next step. It moves the band deeper into synth-punk and post-punk territory without losing the "punk" part of the equation. Whereas New Pleasure was like a wild, bumpy ride, My Punishment on Earth is more like a dark descent into one man's living hell. Given the album title, you probably wouldn't have expected songs about milkshakes and kittens. But this is by no means the bummer of a record that you might assume it to be. While the songs still rage (only two tracks exceed three minutes), the hooks on this particular album are stronger and left with much more room to breathe. These songs really stick with me, and I'm always left wanting more when I reach the end of the album. I'm reminded of everyone from Jay Reatard to modern-day bands like Miscalculations, but I can only describe Priors as true originals. They are writing the manual on how to move punk music into the 21st Century without sacrificing any of the genre's fundamental energy and excitement. If we're talking about great albums of 2021 so far, My Punishment on Earth has got to be in the conversation.