The Erratix - "You Don't Care" 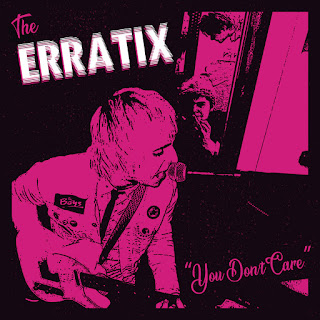 If you're a longtime follower of this blog, you're gonna flip over the debut single from The Erratix! Pals of mine like Mick Fletcher and Jay Castro have been touting this Minneapolis-based foursome for a while. Once I heard the record, I quickly understood why! This single sounds like it could have come out on Dirtnap Records in 2003! The Erratix play that early 2000s by way of late '70s/early '80s brand of powerpop/punk that was such a huge impetus in my starting F & L a decade ago. Out on the Swedish label Beluga Records, the band's debut 7" "You Don't Care" is steeped in Exploding Hearts worship both musically and visually. And there's nothing wrong with that at all! Both tracks are snappy and hook-laden but also tinged with heartache. You know I'm a sucker for this sound, and these guys sure do it well. The keyboards are a really nice touch! If you dig o.g. British punk pop (Buzzcocks/The Boys) and new wave era Elvis Costello, this is a band that ought to be on your radar. A very promising debut!
-L.R.
https://belugarecords.bandcamp.com/album/the-erratix-you-dont-care
https://www.facebook.com/theerratixmpls
https://theerratixmpls.bandcamp.com/
Posted by Lord Rutledge at 7:25 AM