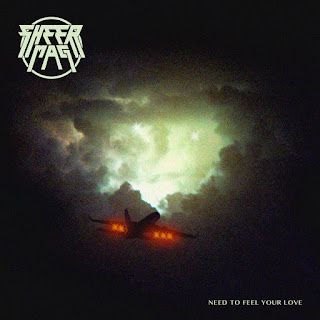 It has been nearly three years since I last reviewed Sheer Mag. It wasn't that I didn't like the band's last two EPs. It was just that I witnessed a number of massive publications (Rolling Stone, Spin, The Guardian, NPR) expounding on the merits of those releases and didn't think myself worthy of adding anything of value to the conversation. But with the arrival of Sheer Mag's debut album Need To Feel Your Love, I concluded that I couldn't possibly not write about it. It's absolutely one of the best records of the year so far. And it solidifies Sheer Mag's position as one of my favorite bands. If I'm not going to write about my favorite bands, then what in the hell is this blog for?!

With Sheer Mag compiling all three of its brilliant EPs onto one collection earlier this year, the stage was set for the Philly outfit to turn a page on its proper debut LP. Sure enough, the band resisted any temptation to pad the new record with re-recordings of old songs. The previous output had established a clear musical identity: DIY punks with a fondness for '70s rock riffs, scuzzy production, and traditional pop song structures, fronted by a fierce powerhouse of a singer. That was merely a jumping-off point for Need To Feel Your Love - a debut album that finds Sheer Mag taking plenty of chances and delivering what just might be the next great rock record. Rock n' roll and punk remain major parts of the equation, but soul and pop loom just as large on these 12 tracks. "Meet Me In The Street" takes the band's love for arena rock way over the top and straight into '80s metal territory. But if you dismiss this opener as big dumb rock, you're missing out on an urgent rallying cry for resistance to oppression and fascism. Hearing "Expect The Bayonet" infuse a soulful pop song with a similar sentiment, I can't help but be reminded of my favorite band of all-time, The Clash. While any musical similarities are slight at best, Sheer Mag is definitely a band that has taken up the fight against injustice all over the world. And just as it was with The Clash, Sheer Mag offers up music that is every bit as compelling as its message. "Meet Me In The Street" is the perfect anthem for our times precisely because it's transcendent rock n' roll above all else (Imagine The Alarm's "68 Guns" if it rocked like an AC/DC song!). And while tracks like "Suffer Me" and "(Say Goodbye To) Sophie Scholl" have very profound things to say about the importance of standing up for what's right, they would not resonate nearly as strongly if they weren't such fantastic songs. "(Say Goodbye To) Sophie Scholl" might be a new high water mark for Sheer Mag - an album closer that leaves a lasting impression and will surely compel a great number of people to research the life story of its subject.

Of course there's also that other side to Sheer Mag. There just aren't many bands better at turning out the kinds of love songs that truly hit you. If you've ever longed for someone who's far away or far gone, if you've ever lost all hope that that certain special person would stop stringing you along, if you've ever found yourself dizzied and intoxicated in the throes of new love, this is a band that ought to speak to you. It's not just the lyrics (which are great) but also the way Tina brings them to life - her voice so full of fire yet still capable of incredible tenderness. And while by no means do I think the band is courting a mass audience, I wouldn't put a whole lot of limits on who might enjoy this album. "Just Can't Get Enough" recalls some of the power pop moments of the band's past, only cleaner and more accessible. "Need To Feel Your Love" and "Pure Desire" are surprisingly successful steps into funk/soul/disco territory. "Milk and Honey" is pure pop without apology. "Until You Find The One" is stripped down to almost nothing but pure despair - like many of the best Replacements ballads.

I would urge all of you who are Sheer Mag newbies to check out the compilation album first. If you dig it, then don't hesitate to dive into Need To Feel Your Love. Sheer Mag is certainly the "biggest" band I've touted in a very long time. But I will never hold critical acclaim against any band - especially one that never asked for it in the first place. I'll never understand people who complain about say, Rolling Stone only writing about crap bands and then still complain when they do feature good bands. Shouldn't we wish our favorite bands all of the success in the world? Sheer Mag is so unconcerned with self-promotion that it isn't even on social media. These five individuals have a built a following the old-fashioned way: by going out night after night and performing their hearts out for the people. They offer hope for all of us who believe that rock n' roll still has the power to change lives and perhaps even the world as well. To dismiss them because they've played Coachella and performed on national television would be the worst kind of cynicism. Yes, great bands still exist. And sometimes a lot of people like them. That sure sounds like something worth celebrating.