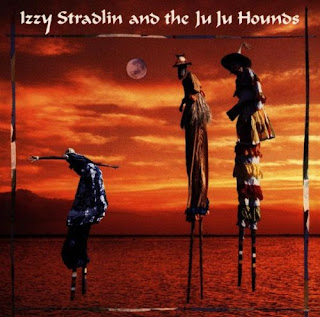 November 1991: it is announced that Izzy Stradlin has left Guns N Roses. No one could have predicted what would happen next. Izzy has been called the heart and soul of the band that he helped form. It is no doubt that he was the Stones, Hanoi, Faces element that blended with Slash's love of Aerosmith and Duff's Damned & Heartbreakers leanings to create that unique sound. Upon his departure, what would they sound like and more importantly what would HE sound like? He was 29, finally clean, and rich enough to either retire comfortably or do whatever he wanted. He chose the latter.

Izzy Stradlin and the Ju Ju Hounds stands up as one of the best debut records in rock history, but it is not the players' first rodeo. Izzy recruited a brilliant band with a murderers' row of side men to assist. He ran as far away from Guns' direction as he could. Izzy's longest musical sidekick is Georgia Satellites guitarist Rick Richards - he has played on every single solo recording that he has released. Along with drummer Charlie Quintana (Plugz, Cruzados, and later Social Distortion) and bassist Jimmy Ashhurst (Broken Homes), that became the lineup. Sonically Izzy was to draw primarily from his love for The Rolling Stones, Faces, and The Clash- much more of the roll than rock and far removed from anything he had done before. Izzy Stradlin & The Ju Ju Hounds was released in October 1992, less than one year after his leaving the Illusion tour. The record is a combination of originals and influences. From the opening swagger of "Somebody Knocking" to the Clash informed cover of "Pressure Drop", the record is bursting with energy and uniqueness for the time. Supporting the band on seven of the 12 songs was Faces organ player, the great Ian McLagan. His contributions really aligned him as the unsung fifth member of the band. Special guest number two is Ron Wood performing on their cover of his solo track "Take A look A The Guy". Rounding out this star-studded list is Nicky Hopkins's incredible piano work on "Come On Now Inside"- a track that could have easily been an outtake from side 4 of Exile On Main St. It is really that good.

One must remember that in 1992, the musical landscape, despite Izzy's cache, was not ready to support a rock & roll record influenced by songs and bands from 20 years prior to its release. Even though the Black Crowes were enjoying success with their second record, I believe the public and the label were expecting and hoping for something closer to Appetite than Exile. Lead single "Shuffle It All" did catch a slight bit of MTV airplay, but the blazing rocker "Train Tracks" much less so. Despite a lack of commercial success, the band did tour the world with wider success coming from Europe and Japan. America was not so supportive. And due to this disappointment, Izzy stopped touring altogether to focus solely on recording.

Because of drug issues with Jimmy Ashhurst, the band was dissolved - with Izzy only keeping Rick along for the future. The record (and subsequent singles and live EP) is an all too brief snapshot. Their recorded output as this unit is incredible, no bad songs at all. The live Japanese EP is a much more stripped-down, raw, powerful version of the band. It contains a great version of the Stones' B-side "Jivin' Sister Fanny". And with all of the B-Sides and live tracks, there are enough songs to make what would have been a second record. The original record was re-pressed in 2016 on vinyl by the label Music On Vinyl with remastered sound. It is fairly easy to find. CD versions can be tracked down on eBay or Discogs for cheap. Try and get the version with the extra EP for three more songs.

Izzy has continued to record ever since 1992. Most of his work has been released in Japan, and later records have gone straight to iTunes. He has recorded nine records on his own. All spring forth from the groundwork laid down with this original lineup. Every time I see a used copy of the self-titled album, I buy it and keep in in my car to pass on to a like-minded individual. I'm shocked that the record is off everyone's radar despite the name printed on the top. This is the best place to start. And the sooner you do, the longer you will have to enjoy this nearly lost album.


-Rob Sheley
Posted by Lord Rutledge at 8:36 AM