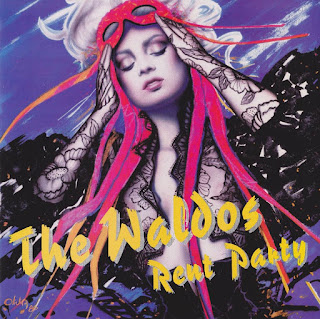 It could easily be argued that The Waldos' Rent Party is the best record that Johnny Thunders didn't appear on. Originally released in 1994, three years after Johnny's death, his foil Walter Lure created one of the most perfect rock & roll records released at that time. Originally comprised of 12 songs (three covers & one from the Heartbreakers days), this album saw Walter picking up the torch and running with it. The record stands up as a tripod with L.A.M.F. and So Alone.

Produced by Andy Shernoff of the Dictators and featuring special guests Michael Monroe, Jesse Malin, Danny Ray, and Daniel Rey, Rent Party showcases the heavy girl group influence that is evident in both the Dolls & Heartbreakers records - making this a welcomed addition to the catalogue. Unfortunately this is the only one. Within one year of its initial release, original drummer Charlie Sox & bassist Tony Coiro had passed away, leaving Rent Party as the only snapshot of a band that had been playing since the mid '80s. The best rock & roll records emphasize the roll, which is always far harder to do than the rock. Everyone can rock. But if you can showcase the roll, then you've got something. Rent Party toggles that line perfectly with the style and swagger that is missing from making a good record great and a great record classic. The record was re-released and remastered in 2013 by Jungle Records (as well as getting a proper vinyl issue as well) - raising the overall sound to proper levels, showcasing the sax & harmonica parts, and adding some bite to the guitars and moving them more to the front. Any one of these songs could have made the cut for L.A.M.F. You could easily put them right next to "Pirate Love" or "Get Off The Phone". "Flight", from the What Goes Around or Down to Kill compilations, gets a proper release. "Never Get Away", "Count Down Love" (penned by Jerry Nolan), and "Love That Kills" exemplify the simple direct nature of rock & roll at its very best. The covers featured here show that the band could take anything and make it its own. "Busted", the Harlan Howard song made famous by Johnny Cash at Folsom Prison, the wild party of the Doc Pomus song "Seven Day Weekend" (originally recorded in 1983 by Walter as The Heroes [also find the Dolls version, it is killer as well]), and the closing raucous of "Party Lights" (nearly unrecognizable to the original in its power) show that Walter and the band were well-schooled in their influences and how to incorporate them into their rock & roll soup. The 2013 reissue on Jungle adds the original 1991 7" tracks (recordings prior to and different from the LP versions) of "Crazy Little Baby" and what would become the LP's opener "Cry Baby". In addition, the reissue includes the 7" from the Blessed (featuring D Generation bassist Howie Pyro). The two tracks from 1979 are very similar to the work of the Zeros - nothing bad, just a comparison point.

Rent Party is a lost gem originally released on Sympathy For The Record Industry with little fanfare. It got a bit lost in the shuffle of Long Gone John's insane release schedule at that time. I cannot urge you enough to make the record part of your collection. You will be thrilled to have it and only disappointed that you haven't had it since its original release 'cause you could have enjoyed it that much longer!

https://www.facebook.com/theWALDOS/
Posted by Lord Rutledge at 8:01 AM

i had no idea the waldos existed. where can you find it? thanks

Good question! I have noticed that this album is hard to find, even with it having been reissued so recently. I believe Jungle Records sells it through its eBay store in the U.K. In the U.S., I believe Amazon has it on CD, vinyl, and digital.