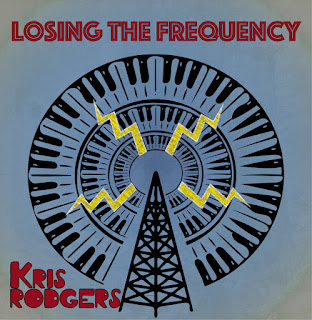 It has already been 15 months since I first teased the arrival of Losing The Frequency - the new album from Kris "Fingers" Rodgers. Its release is finally upon us and has proven to be well worth the wait! Given that I make no apologies for my love of classic rock, it's hardly a shock that I'm so stoked on this album. Out on Rum Bar Records, Losing The Frequency is ten tracks of radio-worthy pop/rock/R & B that take me back to the glorious AOR of my youth.

The first thing that came to my mind with Losing The Frequency was how great it sounds. I immediately had to check who produced it. It turns out it was Rodgers himself in the producer's chair! So I have to correct what I've said about our man Fingers being a triple threat. He's actually a quadruple threat (at least!). Is there anything this guy can't do?! It's likely he will continue to get compared to Elton John for years to come, and not without good reason. But he's probably a little more like the new Leon Russell - a brilliant keyboard sideman who doubles as a formidable singer/songwriter in his own right. He has managed to carve out this very unique space for himself within our underground rock n' roll universe. It's very gratifying to see esteemed publications like Veglam and Uber Rock already offering accolades for his latest effort.

Several of Rodgers's collaborators on Losing The Frequency are themselves well acquainted with the fine art of pop/rock songwriting. Kurt Baker plays bass, Wyatt Funderburk mixed the album, and the amazing Zach Jones makes a guest appearance on guitar. Now that's a star-studded cast! What you have to admire is how Rodgers incorporates his friends' immense talents in support of a musical vision that's uniquely his. If 2014's Headlines established Rodgers as a promising new voice in piano-driven rock, Losing The Frequency is where he fully comes into his own as an artist. Ably backed by The Dirty Gems (on this release Baker, Craig Sala, and Tom Hall), Rodgers has made a record that can stand toe-to-toe with those of his musical heroes.

With just a few notable exceptions, all of the songs here hover right around the four-minute mark. That's right on par for the '70s/'80s era of radio rock from which Rodgers draws so heavily. Yet nothing about what he does sounds stale or bloated. With his booming, soulful voice and hook-laden songwriting style, Rodgers makes classic rock sound timeless instead of dated. Even the grandiose Queen-style epic "Who's Gonna Save You Now" leaves me wanting more - quite a feat for an eight-minute track! I like how there are small touches (the gospel backups on "I Know", the smooth saxophone on "Black Widow") that bring to mind certain excesses of the '80s, yet Rodgers never strays far from a foundation of memorable choruses and strong melodies. "Rock N' Roll Radio" fittingly sounds like a radio hit from an era when the radio still played hits. "Black Widow", the elegant piano ballad from 2014's Whiskey & Soda, gets the full rock treatment here and was a fine choice for the album's lead single. The snappy "Overrated" puts a fresh spin on the '70s heyday of singing piano men. And even when Rodgers gets to show off his tremendous keyboard skills on a number like "No Place To Go", it's completely in service of the song.

Losing The Frequency is an album that breathes new life into the classic rock form. Simply put, Kris Rodgers has a great voice and writes fantastic songs. Regardless of whatever else changes in the musical landscape, talent never goes out of style. Like label mates Watts, Rodgers creates music that will appeal not only to those of us who were weaned on the classics, but also to a whole new generation of fans. Losing The Frequency is available now as a digital release - with CDs coming very soon!